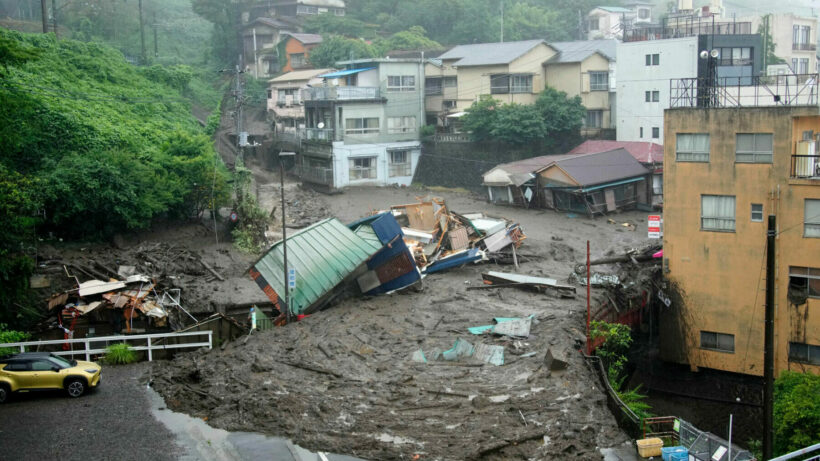 2 people are dead and about 20 are stilling missing after a landslide in the hot spring resort of Atami in central Japan, which is southwest of Tokyo. 10 people have been rescued so far.

The massive mudslide happened in the seaside town of Atami around 10.30am yesterday (Japan Time). It follows the area being lashed by torrential rain and hillside homes being swept away.

A Shizuoka Prefecture official said today that they are trying their best to search for survivors “as quickly as possible while carrying out the operation very carefully as it is still raining”.

Police and firefighters had been looking for the missing but rescue efforts had to pause overnight and resume again this morning. By early morning, 380 people had been evacuated and 10 evacuation centres had opened, says an Atami city official.

At this point, more than 80 houses have been swept away. Vehicles are partially submerged in water and buildings have been tipped from their foundations. About 2,830 homes were without power says the Tokyo Electric Power Company. Although the power has mostly returned.

One resident, Yuji Shima commented that the first thing that struck was the sound of the ground rumbling.

“There was such a muddy, chemical stench in the air… of course as so many things were being washed away. It all happened in a split-second.”

The government has created a task force in response to the mudslide. The Japanese PM Yoshihide Suga offered his condolences to the victims and says the rescue crews are doing their best to save lives and rescue those who are still trapped.

HolyCowCm
If you see actual video of it then you will definitely say wow with an OMG.
kmc
likelihood of death from landslide about the same as death from covid