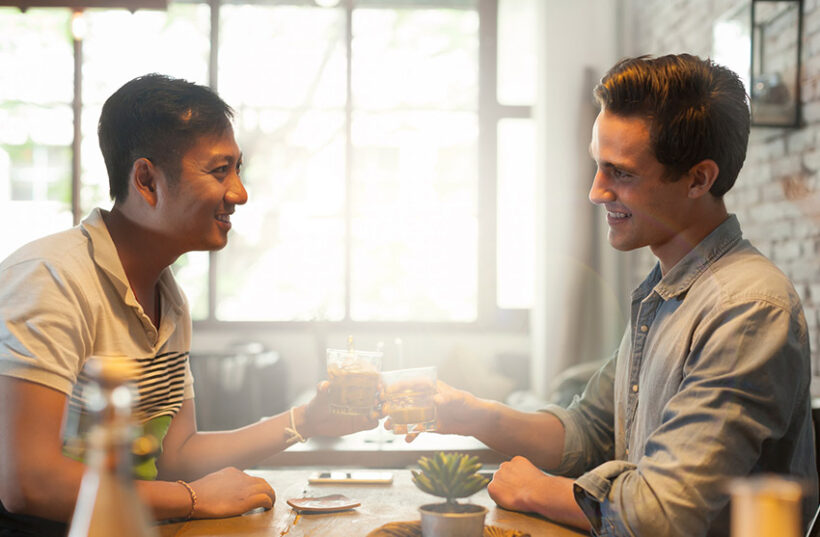 As Thai legislators mull the passing of a Life Partnership Bill, allowing LGBT people to not-quite-get-married but have a legally-binding civil partnership, the attitudes of what Thai people really think about the issue remains unclear. Like much Thai-thinking, the issue has nuances that non-Thais would find difficult to fathom. Unlike other countries there hasn’t been a lot of public debate over the issue

From the outside, on an ephemeral tourist level, Thailand appears to be the bastion of the free and easy lifestyle – the bar-girls (and bar boys) in the short shorts, the ladyboy shows, the delight at having a ‘flamboyant’ member of the family, the TV soap operas where every show has at least one LGBT cast member. From the outside it looks like Thailand is all red, white and blue (the flag) with a shade of pink.

But when you scratch the surface conservative attitudes towards GLBT issues still run deep. There is still ‘much shame’ attached to having a gay member of the family and many, many young gay men for example would never contemplate coming out to their family or friends for fear of ostracism or loss of employment opportunities and promotions.

This subtle polarising towards LGBT issues and the community’s requests for same-sex marriage in the Land of Smiles makes the debate at the top level very difficult to predict. There are no loud street protests, media debate or strongly held opinion shared much in public.

Since the legislation was announced there was a lot of excitement about Thailand, finally, falling in behind other progressive nations that had enacted laws and embraced same-sex marriage.

The proposed same-sex marriage law is likely to be turned down due to conservative lawmakers dominating the legislative system, while younger people, who are generally more liberal towards LGBT rights groups, criticised the Life Partnership Bill as discriminating against some other sexually diverse people

A sub-comittee met yesterday to review the Life Partnership Bill at the Justice Ministry yesterday, where an intense debate raged on the issue of same-sex marriage legalisation in Thailand.

UN Development Programme officer for LGBTIQ (Lesbian Gay Bisexual Transgender Intersex Queer) rights Supanee Pongruangphan said that from the study of the Life Partnership Bill, it could be concluded that it was very hard to settle the issue to suit current Thai society. Supanee pointed out that though conservative values in Thai society were not the only problem for passing this law, the opinion of the conservative members in the country’s law-making machinery was making it hard to get approval for same-sex marriage legalisation.

“Most of the NLA and Council of State members still disagree with same-sex marriage, as they are from the old generation who mostly have conservative ideas and they may believe that this law is not for the benefit of the majority in society,” she said.

Chumaporn Taengkliang, the LGBTIQ rights campaigner from Togetherness for Equality and Action Group, however, stressed that the current Life Partnership Bill was not sufficient to ensure gender equality, as same-sex couples would still not get the same rights as heterosexual couples if this law were passed.

The Life Partnership Bill is currently in the process of being reviewed by the relevant agencies and stakeholders, while the Rights and Liberties Protection Department has said it is working to complete the passing of the law by the end of this year.

Netizens have had their say. This one from a long-term expat…

“I have always found that one of Thailand’s great strengths and attractions is a ‘live and let live’ attitude towards personal matters; what other country has a national beauty pageant for ladyboys and/or has a good chuckle at the ‘beauties’ who show up for the draft?

This tolerance is a good thing; it would be a shame if it was ruined by God-botherers/morality-crusaders as in so many other countries.

Letting gay people get married harms no one. And if something harms no one, what is the justification for not doing it?

Some psychiatric medications, plus too much water, can be deadly in summer heat