Just one day after a double fatality in a tour bus in Phang Nga (story HERE) another passenger van has crashed into the back of a 10 wheel truck on the Phetkasem highway in the Takua Thung district, Phang Nga. The truck was carrying seven Swedish tourists, three have been injured.

Yesterday, a passenger van carrying Chinese tourists crashed into he back of a 18-wheel trailer truck. One Chinese tourist died and the Thai driver died. Seven others were critically injured as they made their way to a pier to go to the Similan Islands and were only four or five kilometres north of Phuket when the accident happened.

In today’s early morning’s accident, the van crashed into the back of the truck, injuring the Thai driver, a Thai guide and a Swedish tourist.

Emergency responders had to use the ‘jaws of Life’ to extract the driver and the guide. Injured passengers were taken to a nearby hospital whilst the other passengers were picked up by the tour organisers.

Police say that their initial investigation suggests that the van crashed into the rear of the truck whilst it was in motion. 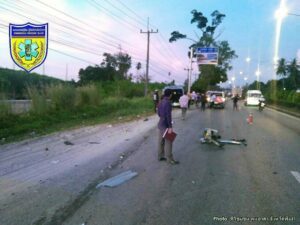