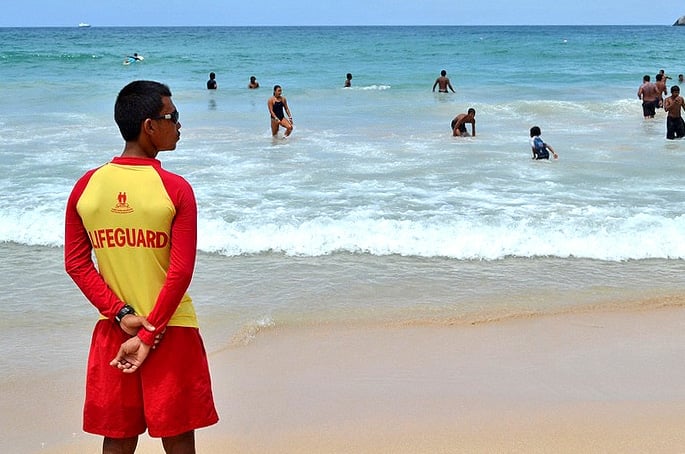 The Governor said today (September 27) that there is no auctioneer joining the bid so far, possibly because of the lower budget of this year.

“I can see that the budget has been cut down every year, from 25 million to 22 million and this year 19.8 million Baht. Today is the last day for interested auctioneers to file their names. If there is no one interested, we may have to make an adjustment for the budget to meet the proper amount for hiring the lifeguards,” said the Governor.

If we can’t find any lifeguard company before the current one finishes the contract, we will have to send the Civil Defense Volunteers to guard the beaches in the meantime.

Meanwhile, the OrBorJor is looking to find a way to increase the budget to hire the same lifeguard company  (Phuket Lifeguard Company) with the same amount of money for the next 2 months after the contract finishes (tomorrow) to give them time for a new draft of the auction.

There has been a similar stand-off between Phuket Lifeguard contractors and the OrBorJor every year for most of the last decade as the budgets keep being cut at a time when more tourists continue to come to the island and swim at the beaches. This is especially an issue considering the rise in low-season passenger traffic to the island with the rise of Chinese tourism which is swelling the numbers during the traditional quieter months from April to November.

Crisis unfolding on our doorstep