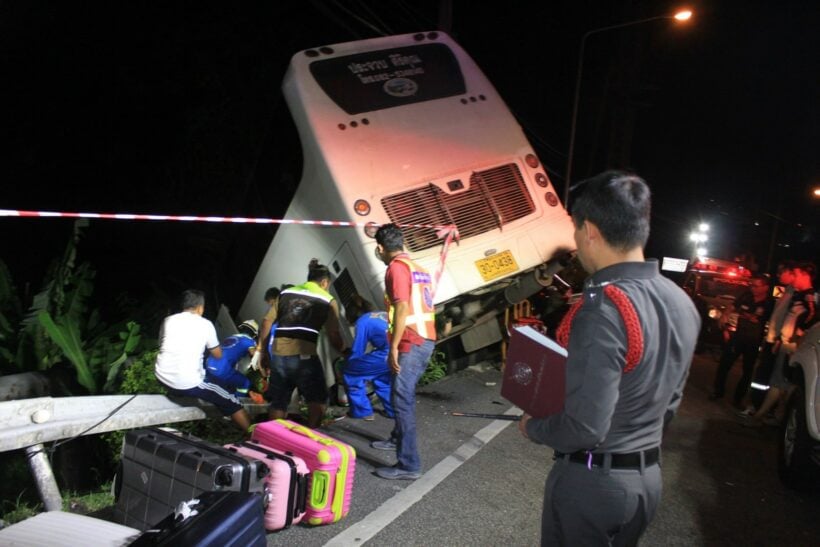 The 65 year old driver of the Chinese tour bus that crashed last night, Prajuab Sirikul, is likely to be charged with careless driving.
At the moment he’s one of two people listed in a serious condition at Vachira Hospital. The other person was driving a motorbike when the bus collided with traffic around 8pm last night. He’s 31 year old Atsawadee Jesawa. The bus collided with six vehicles – three passenger vans, a tuk tuk and a motorbike before crashing through the steel railing on the side of the road and coming to rest on a water mains pipe.
20 people were taken to hospital last night following the accident. 19 are reported to have been released at this stage. A total of 25 people were in the bus – 21 Chinese tourists, 3 tour guides and the driver.
Police have ruled out poor diving conditions or bad lighting as contributing factors and say they intend to charge Mr Sirkul with careless driving when his condition improves. Police claim he was driving too fast at the time.
The accident brings the total of Chinese tourists being sent to hospital following bus crashes on Patong Hill to over 50 in the past two months. Phuket’s Governor Noraphat Plodthong promised to stem the carnage on the notorious hill road following last month’s crash where another Chinese Tour bus, again with alleged brake failure, turned onto its side and crashed into shops. That crash killed a 12 year old boy and his father.
(PHOTO: Kritsada Mueanhawang)