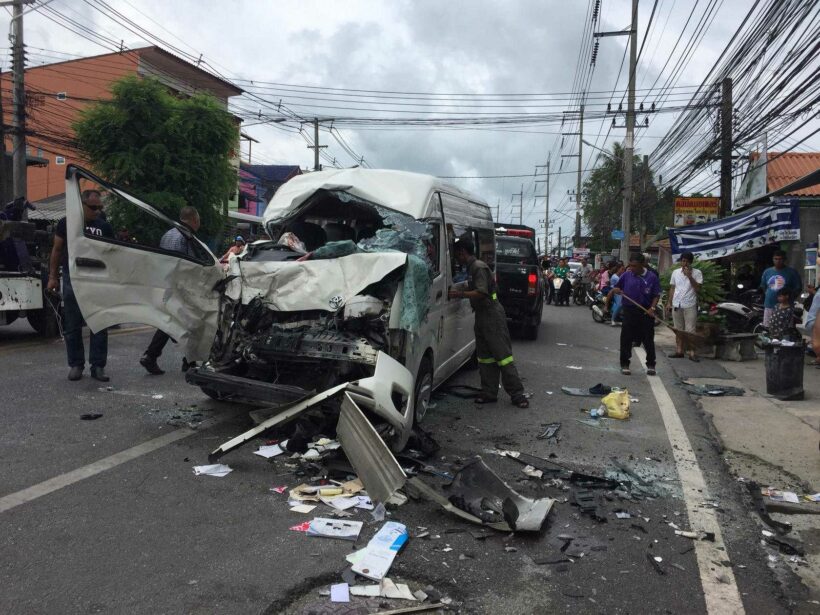 A 6-wheel truck transporting fabric was cut in front by a car and caused it to lose control. It flipped and hit a van that was transporting tourists, which resulted in 4 critical injuries and 4 others being taken to hospital with less severe injuries.

The accident occurred on the main road to Chalong Circle. Chalong Police, Chalong Mayor and other authorities along with rescue teams, found the 6-wheel truck damaged in the front end in the middle of the road with 3 injured, including 28 year old Suchet Suktham, who injured his leg, 35 year old Wandee Nun-On, and 28 year old Pakpum Thong-Aram, both who were critically injured. They were sent to Vachira Hospital.

In the van that flipped on the side road and with bad damage to the front, the officers found 4 injured tourists, including a 4 year old Chinese boy, Fan Jeung Chen, 30 year old woman, Thong Hong, a Chinese woman named Liu Lin and the driver, Chotikorn Bangsunan, who was critically injured. They were all sent to Chalong Hospital.

Nearby the two vehicles at the scene, there was also a white Honda Civic that had a bump on the right rear of the car.

After checking the CCTV camera footage at the scene, police found that the 6-wheel truck was driving from Phuket Town towards Chalong while the car cut in front of the truck trying to make an immediate right hand turn making the truck brake, flip and then hit the van.

The driver of the car is being questioned by police about the incident.