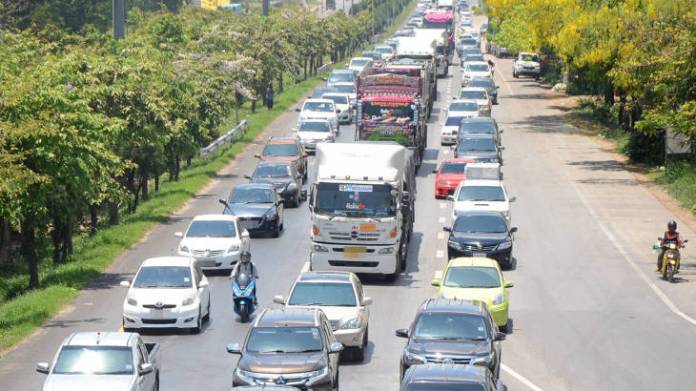 Police have prepared air-conditioned accommodation for motorists who might feel tired after a long drive during the Songkran holidays, a police chief said on Monday.

Highway police commander Pol Maj Gen Chut Sukkaewnarong says toilet facilities would also be made available for motorists but added that since the number of temporary accommodation spots was limited, motorists were advised to check availability with the Highway Police Division on the Line app (ID: @highway1193), or on their Facebook page (Tamruaj Thang Luang).

He says motorists driving to the North, Northeast Central and South, could contact the Line ID and hotline 1193 24/7 if they needed emergency help or urgent accommodation.

Meanwhile, the Royal Thai Police are launching various safety and security measures, including a vacation home-watch scheme, for the upcoming Songkran holidays. Among the measures are preparedness of the Bangkok-based 191 Emergency Call Centre (Phanfa), which is in the process of being upgraded to a national-level centre linking related agencies to ensure help arrives within 10 minutes of a call.

Tourist Police deputy chief Maj-General Surachet Hakpan concurred with the idea, as it would make the country’s current 50 emergency hotline numbers – which caused confusion and inconvenience to the public – into one number: 191.

Meanwhile, Pol Maj-General Jirapat Phumjit, the city’s deputy police chief in charge of traffic, has instructed officers at 88 precincts to strictly enforce traffic laws, especially against those who violated the top five traffic offences: speeding, drunk driving, failing to wear a safety helmet, failing to present a driver’s licence, and failing to wear a seat belt.

The Royal Thai Police has also issued an order prohibiting heavy trucks to run on some sections of three main highways where traffic will be very congested during the upcoming Songkran festival next week.

However oil trucks, cold storage trucks with seafood cargo, and trucks with farm product cargo, will be exempted.

The ban on heavy trucks having 10 wheels up came after the government has ordered all related state agencies to tighten up measures to ensure safe travelling and to facilitate travellers during the festival from April 11-17.