About 500 students alongside some teachers and parents of Srinagarindra the Princess Mother School in Phuket, gathered this morning (September 11) to call for the School Director to resign following several criticisms about his work.

The signs written by students were presented at the protest showing many issues such as “Megalomaniac, get out!”, “Go use your power somewhere else. We don’t want you here”, “What Teacher Soh said was right and for the benefit of students. Why did you have to insult him until he was shocked and sent to hospital?”, “Why do you have to ask all teachers to pay 10,000 for each building pillar and threatened to expose whoever does’t obey on the school board?” and “When your student had an accident, have you ever paid attention?”

Wichit police went to the school to control the unfolding protest. Students and teachers who led the mob were asked to have a talk with the school’s administrative board. However, they couldn’t make any agreement as they required a negotiator.

Later in the afternoon, Phuket’s Governor ordered local authorities to schedule a meeting with the two sides.

After 2 hours of meetings, the Deputy Chief of Phuket Provincial Education Office, Sutat Kaewpoon, alongside the Deputy Director of the school, explained to the protestors that there were two outstanding problems. The first one is the administrative and management style of the Director which also includes the way he treats his subordinates. The second one pertained to the budget spending on school and education development.

After the meeting at the school the cases will be filed with the Governor and the Phuket Provincial Education Office as well as School District Office Region 14 who is directly responsible for the school and who will decide on the cases. During the consideration, the School Director will remain in his position. 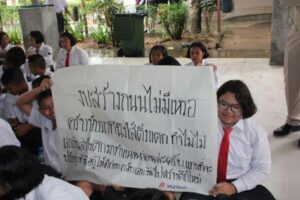 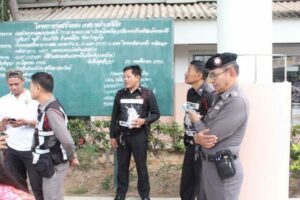 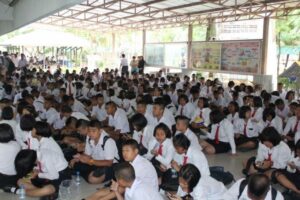 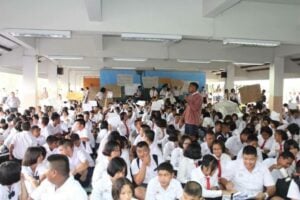 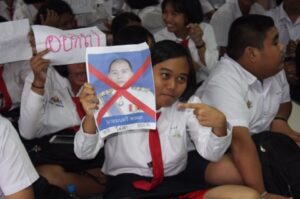 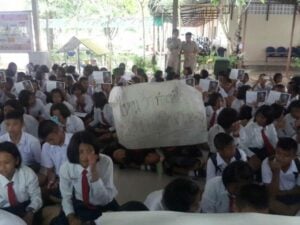 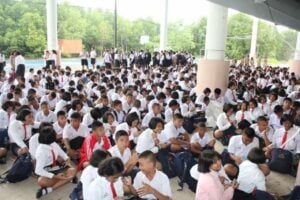 Countdown to the big clean-up