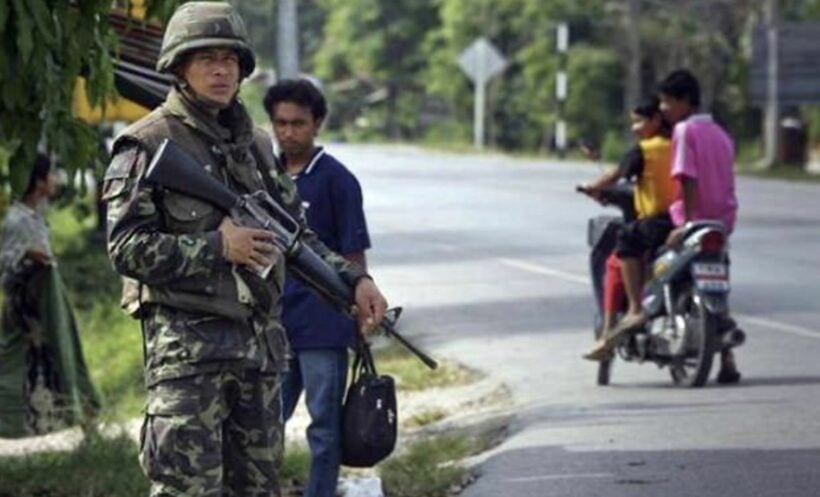 Rangers have shot and killed 2 suspected insurgents in the latest clashes in Thailand’s Deep South, this time in Songkhla’s Chana and Thepha district last night. Police and soldiers headed to the area after receiving reports that 4 insurgents were in the ares and travelling on 2 motorcycles. The suspects dispersed as the police and soldiers arrived. 3 separate clashes followed.

2 other suspected insurgents were killed in the first 2 clashes which occurred in Chana and Thepha districts. The 3 clashes happened in 3 different parts of the area.

In the 3rd of the clashes a 39 year old suspected insurgent was killed. 4 local rangers were also injured in that attack.

The authorities combed the area and found the body of another suspect at a beach near the Krong Itam village in Koh Saba. believed to have died in the clashes.

He is believed to be Che Arong Baheng, an alleged insurgent operating in the Na Thawi district.

Clashes between religious insurgents and local Thais have been ongoing for 2 decades. More than 7,000 people, mostly civilians, are thought to have died in the territorial war. It originated in 1948 as an ethnic and religious separatist insurgency in a part of the Malay Patani Region, then comprising the 3 southernmost provinces of Thailand and parts of a 4th, but has become more complex and violent since the early 2000s where the violence has become entwined with activities from drug cartels, oil smuggling networks and Muslim insurgents.

Monkeys take over Songkhla home while family away for holiday