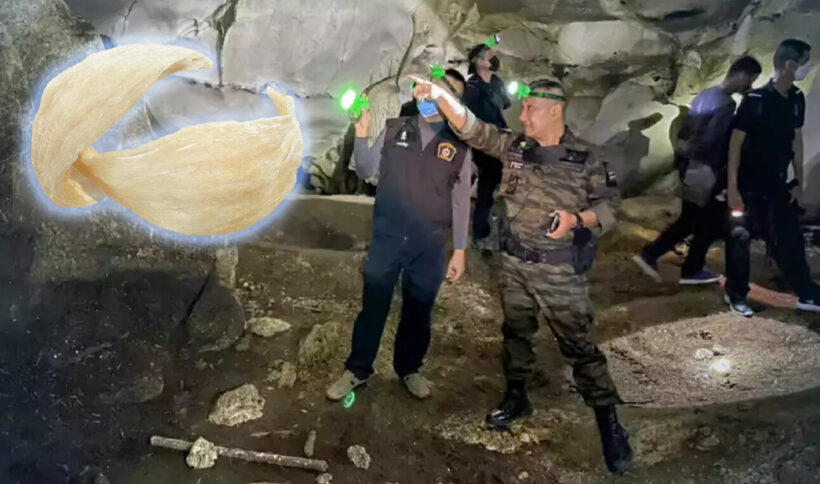 Phatthalung authorities have requested help from the Department of Special Investigation to investigate the death of birds. These were no ordinary birds though; they were swiftlets, the birds that produce the saliva that make birds’ nest, prized as a health delicacy. And it wasn’t a few birds, it was over a million birds found dead in caves where Siamnest company has the authority to collect their birds’ nest.

And the financial loss of these birds and the birds’ nests they produce has been estimated at about 5 billion baht.

The company has permission to access 107 caves in Phatthalung’s seven islands and they sent their collection teams to gather the birds’ nest between September 9 to September 17. When they arrived to the last cave, they discovered the remains of more than 1 million birds instead of the nests they were tasked with collecting.

The team found the remains of a fire and various trash strewn about including shoes and plastic bottles. After Siamnest involved the Phatthalung authorities, the Royal Thai Police joined the investigation of the mass death of the swiftlet birds.

Unlike most birds that make nests out of twigs or similar materials, swiftlets make theirs completely out of their unique saliva which solidifies to form the nest. These saliva nests are considered a delicacy, especially in Asian regions, for it’s believed healing powers. Birds’ nest soup is often made by steaming and soaking the saliva nests.

The nests are said to help with kidney health, phlegm reduction and are desired as an aphrodisiac as well. Harvesting companies have become big businesses due to the high price the unique birds’ nest can fetch, with companies like Siamnest getting exclusive access to areas the swiftlets nest or even creating artificial sanctuaries for swiftlets to nest.

Of note, disgraced police officer Pol Col Thitisan “Jo Ferrari” Utthanaphon, whose shocking wealth was revealed upon his arrest for suffocating a suspect in custody, was said to have made part of his fortune by trading birds’ nest.

MrStretch
13 hours ago, WilliamG said: Bht 5000 per bird ? No way. Oh, yeah.  I've begun researching into building one of those swiftlet houses in the wife's moo bahn as a retirement and family income strategy.
Cathat
1 hour ago, HolyCowCm said: Yep. If you ever get the chance take the hydro ferry out from Ho Chi Minh to Vung Tao. You will see huge high cement buildings that seem to be made for this. Interesting to…

Nobodysfriend
---> "they discovered the remains of more than 1 million birds instead of the nests they were tasked with collecting. The team found the remains of a fire and various trash strewn about including shoes and plastic bottles." <--- Remains…
HolyCowCm
1 hour ago, Cathat said: There are hundreds of those towers to attract the birds in Malaysia also. I have chatted with a few of the locals about it and they make a very good living from it. Yeah I…

Ynwaps
The company using these birds for profit is to blame. Now they act like they've got billions over billions in imaginatory losses but reality is they're not the victims here and should be revoked the license and rights to these…