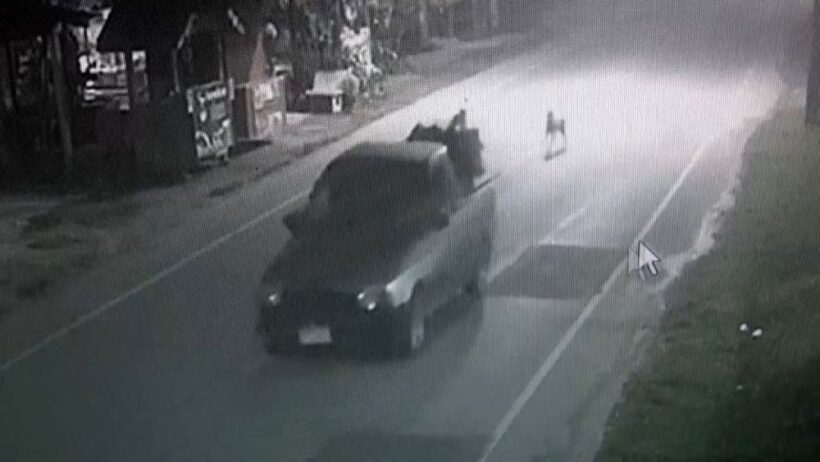 “The animals were apparently tranquillised and so were helpless when attacked by the dogs.”

Police in Hat Yai have been hunting for the driver of a pick-up truck seen dropping off 36 cats at a temple yesterday before 33 of them were mauled to death by stray dogs.

A villager filed a complaint with police after finding the 33 cat carcasses the previous morning. The villager was accompanied by Suchart Maneechote, head of Ban Thung Ngai village in tambon Thung Yai of Songkhla’s Hat Yai district.

Suchart said local villagers found it unacceptable for the pickup driver to leave the cats to die at the temple.

Local villager 49 year old Chai Panchalerm says she saw many dead cats inside the temple at 7am and only three cats still alive.

Footage from the village security unit in front of the temple showed a Nissan pickup being driven into the temple at 2am and leaving 15 minutes later.

Suchart said the cats were mauled by about 30 stray dogs left at the temple and cared for by the monks out of mercy. Suchart said he would consult with the temple about building cages for the stray dogs, which he described as being rather fierce.

Thana Toram, an official of the Demo Cats organisation that helps stray cats in Hat Yai, said the animals were apparently tranquillised and so were helpless when attacked by the dogs. Cats are normally able to escape from dog attacks, she said.

Thana suspects that the cats were strays from a particular market and were drugged and put into cardboard boxes to be dumped at the temple.