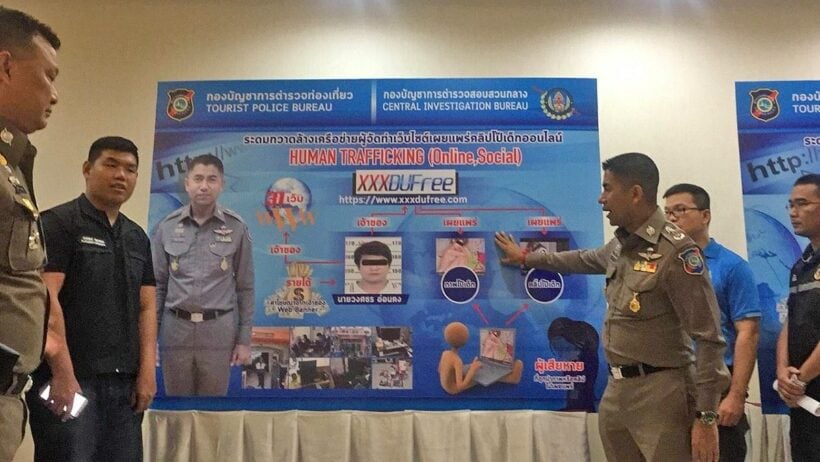 Six suspects have been arrested in nationwide crackdowns on child pornography websites.

Pol Maj Gen Surachet Hakpal says five suspects from three networks carrying online child pornography have been arrested under warrants and their accounts led to an arrest of another suspect.

He said the suspects were arrested in Samut Prakan, Surat Thani and Ubon Ratchathani.

Surachet said police learned from one suspect, identified only as 29 year old ‘Oh’, that the networks had sponsors and had several websites.

The officer said police were tipped off by non-governmental organisations to carry out the crackdowns. He says over 500 child-porn websites have been blocked.

Anti-trafficking chief Pol Maj Gen Kornchai Klayklueng says pornographic websites were human trafficking crimes and most of the offenders are programmers or experts in doctoring photos.

The divisions will focus on computer and social media evidence gathering, and in suppression of child trafficking and child pornography.

Speaking in his capacity as the director of the RTP’s centre tackling human trafficking and the protection of children, women and families, Thammasak said an emerging human trafficking method was to lure female and male youths to take indecent photos and video clips to sell via social media.

The Thailand Internet Crimes Against Children (TICAC) Task Force was set up two years ago to tackle this and similar crimes and has made many arrests. Most culprits were Thai nationals, and not foreigners as Thai police had originally assumed based on the Interpol database at the time.

Thammasak said his centre had initially pulled all available resources to tackle issues. But as workloads expanded, he proposed two new divisions be set up – the digital forensic science division and the TICAC division – and the national police chief approved the plan. The centre now works closely with the 150strong TICAC on digital investigation.

The digital forensic science division will recruit 100 bachelordegree holders from within the police force and outside for computer, social media and telephone evidence gathering, he said. Approval for the division focused on child pornography has meant a permanent status, structure and staffing positions for TICAC. US authorities have provided useful advice to TICAC over the past two years and have in turn praised TICAC as a good model for child trafficking suppression work in Southeast Asia, he added.

Thammasak hoped factors – especially Thai authorities’ continuing measures to prevent and suppress humantrafficking crimes – would improve the country’s position from Tier 2.5 on the watch list to Tier 2 in the US Trafficking in Persons (TIP) Report 2018, which will be released in June.

They gave a formal warning to a karaoke bar in Tambon Tha Khor that employed some girls under 18. The bar’s owner insisted the youths worked as dishwashing staff and not waitresses, while another beer and karaoke bar employed six Thai and seven Lao women with proper work permits. Apinya said the authorities have to be more vigilant now that human traffickers are using various techniques including abduction, and are luring foreign women into prostitution via marriage.