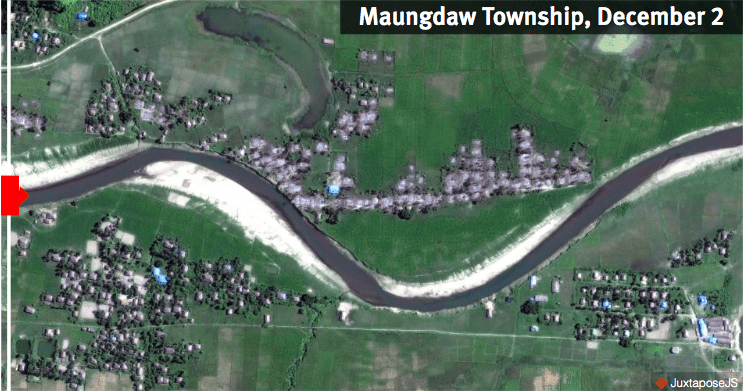 Analysis of satellite imagery reveals new destruction of Rohingya villages during October and November 2017 in the northern Rakhine State in Burma. This latest report, along with their evidence, has been released by Human Rights Watch today.

Human Rights Watch have identified 40 villages with building destruction occurring in October and November, increasing the total to 354 villages that have been partially or completely destroyed since August 25, 2017. During this period, thousands more Rohingya refugees fled Burma and arrived in Bangladesh.

Satellite imagery confirms that dozens of buildings were burned the same week Burma and Bangladesh signed a Memorandum of Understanding on November 23 to begin returning refugees in Bangladesh within two months.

“The Burmese army’s destruction of Rohingya villages within days of signing a refugee repatriation agreement with Bangladesh shows that commitments to safe returns were just a public relations stunt,” said Brad Adams, Asia director at Human Rights Watch. “The satellite imagery shows what the Burmese army denies: that Rohingya villages continue to be destroyed. Burmese government pledges to ensure the safety of returning Rohingya cannot be taken seriously.” 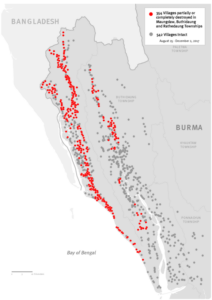 Human Rights Watch has used satellite imagery to assess and monitor over 1,000 villages and towns in the townships of Maungdaw, Buthidaung, and Rathiduang, where the Burmese military and vigilantes have engaged in attacks on Rohingya. Human Rights Watch found that the damage patterns in the 354 affected villages are consistent with burning occurring in the weeks after the military operations began in late August.

Of the 354 affected villages, at least 118 were either partially or completely destroyed after September 5 – the date the Burmese State Counsellor’s office announced as the end of clearance operations. Of the 40 new villages with building destruction identified by Human Rights Watch, 24 were destroyed in October, 11 in November, and 5 over both months. 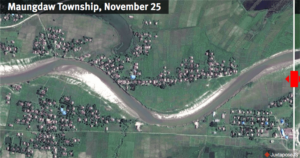 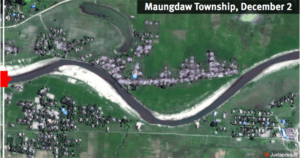 The latest documented arson attacks occurred between November 25 and December 2 in four villages. Satellite data from environmental sensors detected an active fire at 12:30 p.m. in the Rohingya village of Myo Mi Chang in Maungdaw Township on November 25. Building destruction was concentrated in the center of the village, which was undamaged until this attack. Other villages subjected to arson attacks during this period include Nga/Myin Baw, Goke Pi, and an unknown village in the village tract of Zee Pin Chaung.

On November 23, Bangladesh and Burma signed an Arrangement on Return of Displaced Persons from Rakhine State on behalf of “residents of Rakhine State” who crossed from Burma into Bangladesh after October 9, 2016, and August 25, 2017.

Human Rights Watch claim that this campaign of “ethnic cleansing” amounts to crimes against humanity. Attacks by the Arakan Rohingya Salvation Army (ARSA) armed group on 30 security force outposts and an army base that killed 11 Burmese security personnel set off the Burmese military “clearance operations” against the Rohingya.

In November, a Burmese army “investigation team” report concluded that there were “no deaths of innocent people” during the military operation in Rakhine State, and that at least 376 “terrorists” were killed during fighting, contrary to information reported by the UN, media outlets, and human rights groups, including Human Rights Watch.

The humanitarian group Medecins Sans Frontieres (Doctors Without Borders) on December 14 concluded that at least 6,700 Rohingya were killed in the violence, over 700 of whom were children, based on survey data of refugees in Bangladesh.

“The UN Security Council and concerned governments shouldn’t continue to stand by as evidence of continuing attacks on the Rohingya community comes to light,” Adams said. “Targeted sanctions need to be imposed now against those responsible for ordering and carrying out crimes against humanity.”

Pretty in pink – the OrBorJor expands the Potong bus services