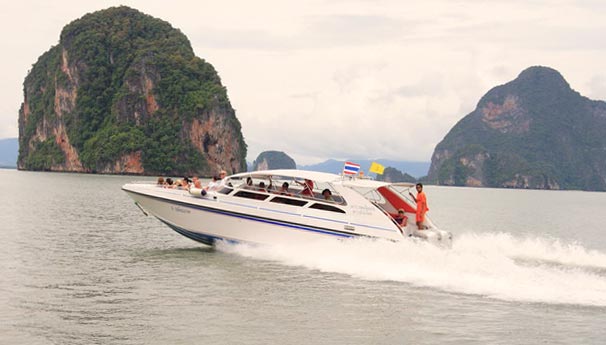 Let’s be clear from the off that we’re talking about speedboats, specifically day tour operators who pack in the tourists on an overpowered wooden speedboat and then zip off (at speed) to stop A, B, C and D, with a lunch thrown in along the way.

In Phuket’s high season, these overpacked “cattle tours” can be seen speeding around Phang Nga Bay and to surrounding islands such as Phi Phi, Racha and many more. Their sole goal is to get tourists from A to B as fast as possible. Then from B to C in the same fashion. Customer comfort or experience is not part of the equation.

In Phuket’s low season, these speedboats can be death traps. It’s not the boat per se, but more the driver and the sea state. Phuket and the Andaman region can experience heavy rain, low visibility and large swells at this time of year – conditions not suitable for small boats to leave shore. And even when official warnings have been issued, on occasion such boats have headed out. Money rules.

This past week Phuket has seen two more accidents – two more added to an ever-growing unacceptable toll of accidents at sea.

The first took place on Monday 31st July when two speedboats – Wararat and 999 Tour 41 – collided in Phang Nga Bay. According the The Phuket News, “Nineteen people, including 16 tourists and three Thais, were plucked from the sea.”

The second incident took place on Friday 4th August when a speedboat sank in Krabi, just 500 metres from the pier at Nopparat Thara Beach. Kritsada Meuanhawong reporting for The Thaiger, wrote: “Approaching the pier the boat was hit by a series of waves and strong winds pushing the boat into a rock nearby.” The ten passengers in the sea scrambled onto nearby rocks and were later rescued and taken to Krabi Hospital. No serious injuries were reported.

The good news is that nobody was seriously injured. It appears passengers were wearing life jackets which have clearly done their job – save lives.

There will, however, be more speedboat incidents before the low season ends. And historically, there have been deaths.

Sporadic half-hearted inspections by authorities have achieved little. Drivers caught breaking laws have been lightly fined or punished, yet the carnage continues. Surely it’s time to once and for all establish a registration system of all boats, drivers and operating companies? To check all safety equipment and increase the frequency of inspections? And to hold both driver and tour operator accountable?

Across on Thailand’s East Coast, Marine Scene Asia recently boarded a private speedboat at Bali Hai Pier in Pattaya all the time under the watchful eye of a local government official. As we boarded he questioned the captain as to the presence of life jackets, where we were going for the day and he also requested to check the boat and driver’s papers.

Prevention is always better than cure.

Upgraded flights from Doha to Krabi.