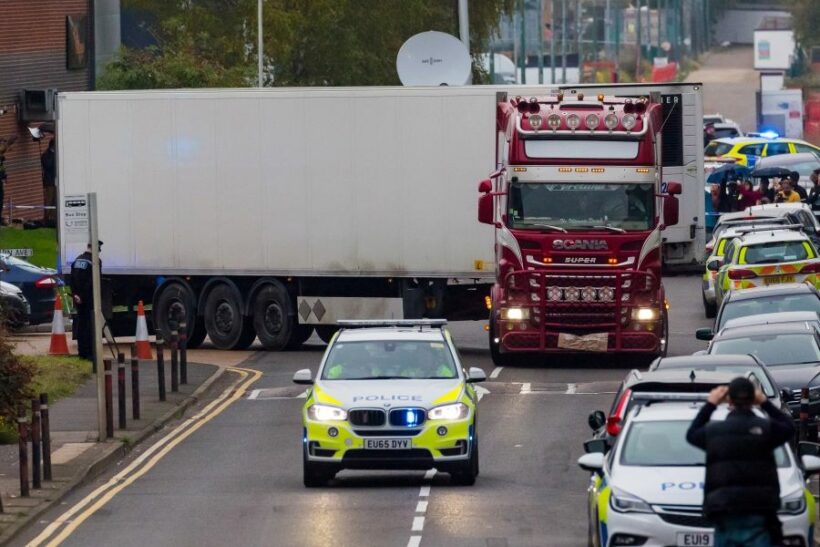 Eight people are now in custody in Vietnam in connection with an ongoing investigation into the deaths of 39 migrants in the back of a refrigerated container truck in the UK on October 23. The New York Times reports that the arrests have been covered by Vietnamese state media, with senior police vowing to fight the people smugglers responsible for this and other similar tragedies.

Nguyen Huu Cau, the police chief of the Vietnamese province of Nghe An, says… “Based on what we learn from the suspects, we will actively launch investigations to fight and eradicate these rings which bring people illegally to Britain.”

The 39 people found dead inside the container are all believed to be Vietnamese nationals, although full confirmation is not yet available. They are believed to have been trafficked by a global network of people smugglers.

The latest arrests come after a number of people were arrested in the UK and Ireland, including the truck driver, named as ‘Maurice Robinson’ from Northern Ireland. He has now been charged with 39 counts of manslaughter and conspiracy to traffic people. He remains in custody.

Another truck driver, reported to be ‘Eamon Harrison’, also from Northern Ireland, has also been charged with 39 counts of manslaughter, human trafficking as well as immigration violations. Harrison reportedly delivered the trailer to a port in Belgium where it was put on the ferry to England.

Migrants routinely take life-threatening risks in their attempts to create better lives for themselves and the latest deaths are not the first time people have been fatally loaded into airless trucks.

In 2015, a truck found at the side of an Austrian highway was found to have 71 dead people inside.

Yesterday, another 41 migrants were found alive in a refrigerated container in Greece. In that instance, the refrigeration had been turned off. The majority of the migrants were from Afghanistan, with one person from Iran and another from Syria.

The driver, who is reported to be from Georgia, has been arrested for human trafficking.