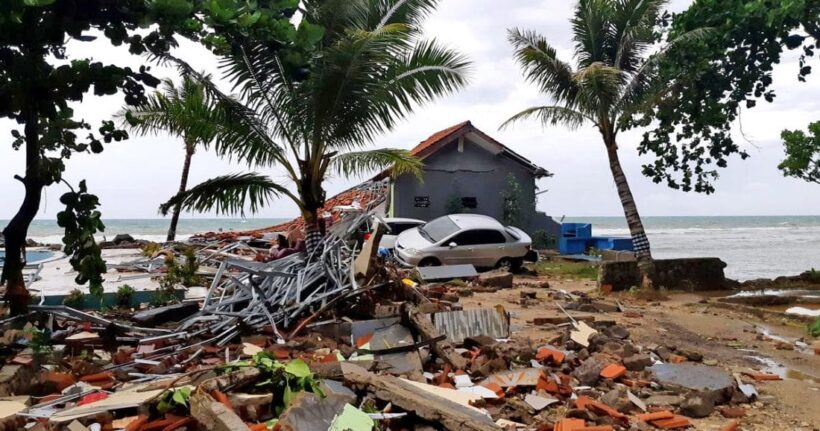 A threat looms of more potentially deadly tsunamis in between the island’s of Java and Sumatra in Indonesia, this according to the country’s National Disaster Mitigation Agency.

5,600 people are now reported as officially displaced. That’s on top of 373 killed, 1,459 injured and 128 missing. The toll continues to rise as searches arrive in more remote areas.

On top of the massive human toll, the property damage is also extensive. Early assessments indicate that 558 hotels have been destroyed, and nine hotels, 60 restaurants and 350 boats suffered heavy damage.

According to vulcanologists and seismic experts, the disaster was the product of multiple triggers: a volcanic eruption causing a 64 hectare chunk of Anak Krakatau (the volcano rising out of the crater left by the Krakatoa explosion back in 1883), to slide off the island volcano and into the ocean during a full moon at high tide. Although the tsunami wasn’t very high (compared to other recent tsunamis around south-east Asia), the impact was made worse by the peak tide.

The Sunda Strait, which runs between Java and Sumatra, had also experienced a spell of high rainfall, according to meteorologists.

The tsunami struck at 9:30pm local time during a local holiday, with few of the warning signals that might have come had the tsunami been generated by an earthquake.

Locals say the seawater didn’t recede as a prelude to an approaching tsunami following an earthquake and experts say that, even if there had been warning buoys near the volcano, there would have been minimal alert time due to the proximity of the volcanic activity.

Meanwhile, Channel News Asia reports that only one member of the Indonesian pop band that was swept out to sea when the tsunami hit it mid-performance has survived the disaster.

That leaves frontman Riefian Fajarsyah, whose wife was also caught up in the tsunami and remains missing, as the sole surviving member of the quartet.

With a ‘whoosh’ his village was gone – Tsunami Update