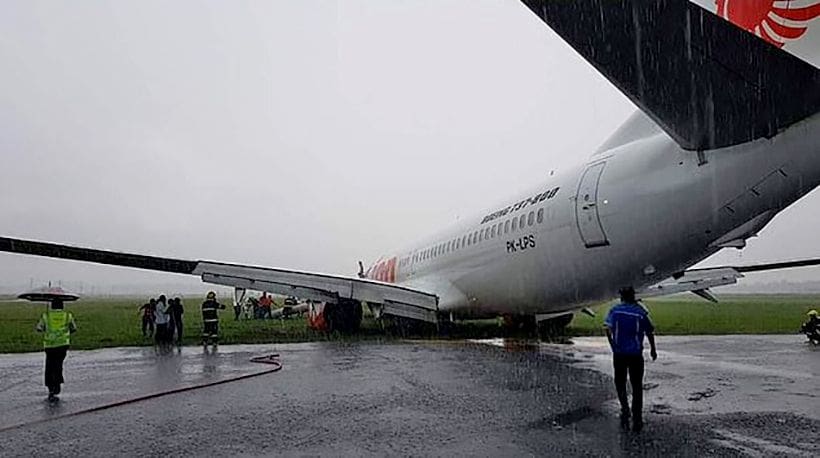 Another PR disaster for Lion Air, luckily no fatalities in this latest incident.

A Lion Air Boeing 737 with 189 people on board has skidded off a Borneo runway as the pilot tried to land during heavy rain. The Lion Air flight was coming in to land at the Supadio International Airport.

The aircraft was carrying 182 passengers and seven crew members, landing after a flight from Jakarta. Passengers were quickly evacuated and there were no injuries.

A Lion Air spokesperson Danang Mandala Prihantoro confirmed there were no injuries.

The Boeing 737-800NG jet was flying between Jakarta and Pontianak in Indonesia when it slipped from the landing strip and tumbled into the adjacent paddock.

The runway, which services a small number of international flights, was closed following the incident.

Mr Prihantoro said the Lion Air crew worked quickly to evacuate the plane and claims that visibility in the rain had met landing requirements. Mobile phone footage shows how the aircraft suddenly veered to the left before landing on the slippery tarmac.

Passengers had to scramble from the exit and walk along the wing. The wheels of the plane were almost entirely sunken into the ground.

Emergency services were pictured helping passengers escape the plane from an inflatable slide at the front door. Other workers were seen moving the broken wing of the jet as rain and fog continued to fall on the Indonesian island.

Another Lion Air jet, a Boeing 737 MAX, crashed into the Java Sea in October last year – killing all 189 passengers on board just 13 minutes after taking off. The airline has had 11 safety incidents since 2002.

Watch video of the landing HERE.