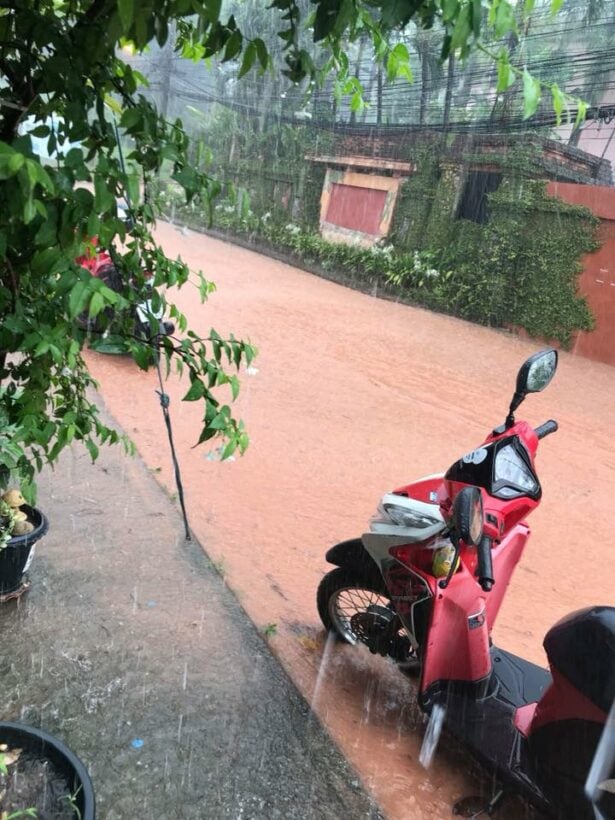 All regions in Thailand are expecting increased rainfall from now until the weekend while officials in many provinces are mopping up the damage left behind by recent storms.

TMD has issued weather warnings for thunderstorms and heavy rain up to May 13 as a high-pressure trough from China extends across the upper part of Thailand while southeasterly winds continue to produce humidity over the South China Sea and in the Gulf of Thailand.

The precipitation is expected to taper off on May 14-15. However, the northern region is likely to remain wet even on the 14th due to the influence of westerly winds.

Extensive damage has already been reported in Nakhon Si Thammarat province, with three villages in Sao Thong subdistrict of Ron Phibun district battered by a ‘tornado’.

In Tha Bo district of Nong Khai province, gusty winds caused damage to 15 homes, most of which had their roofs blown off, while many large trees were felled. Soldiers and officials from many agencies were deployed to clear away the debris.

In Bueng Kan, local administrators in So and Kham Kaeo subdistricts of So Phisai district joined local soldiers and community leaders to assess damage following heavy rains. Many large trees and electricity poles were found to have been knocked down by strong winds, damaging over 30 residences.

Phuket has experienced some localised storm cells over parts of the island in recent days causing some local flooding, mostly around the middle of the island.

The forecast predicts a 60% of rain for Friday and only 40% chance over the weekend for the island.