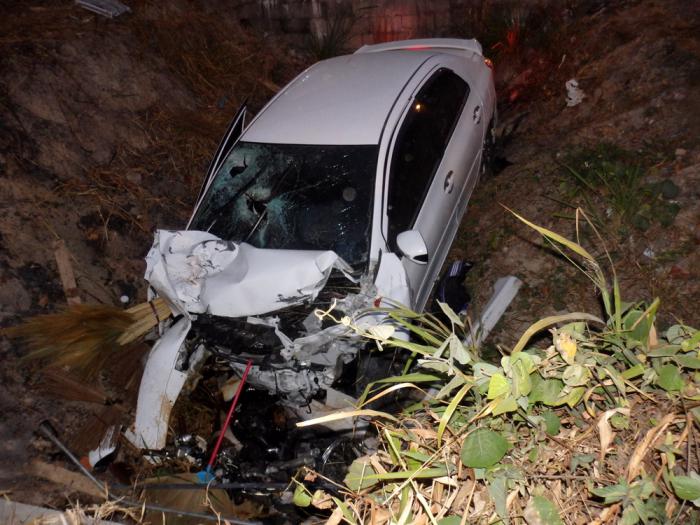 PHUKET: Rescue workers saved a Phuket woman from the wrath of an angry mob in Pa Khlok early yesterday evening after her car struck a local man and dragged him to his death.

The accident occurred in Baan Bangla, about two kilometers east of the Heroines Monument (map here), at about 6:30pm, Lt Chatree Chuwichian of the Thalang Police told the Phuket Gazette.

Witnesses reported seeing a Toyota Vios being driven at high speed toward the Heroines Monument when it struck a motorcycle in front of it, driven by 28-year-old Panthep Suebsode, Lt Chatree said.

The car dragged Mr Panthep and his motorcycle across the oncoming lane for 100 meters before his body fell into a roadside ditch.

The vehicle then plunged into the same ditch with the motorbike still pinned to its front bumper.

“Villagers were furious when they saw Treesukon Lohprodpai, 24, get out of her car holding a mobile phone. Local rescue workers sped her to Thalang Hospital to prevent the crowd from attacking her,” Lt Chatree said.

“It took some time for police and other rescue workers to calm them down.”

Ms Treesukon told police at the scene that she was not talking on the phone when the accident occurred, but admitted that she was reaching under the seat for something at the time of the collision.

“We have yet to press charges. She is still in hospital recovering from chest pains,” Lt Chatree said. “We will wait for her condition to improve so we can question her fully about the accident.”