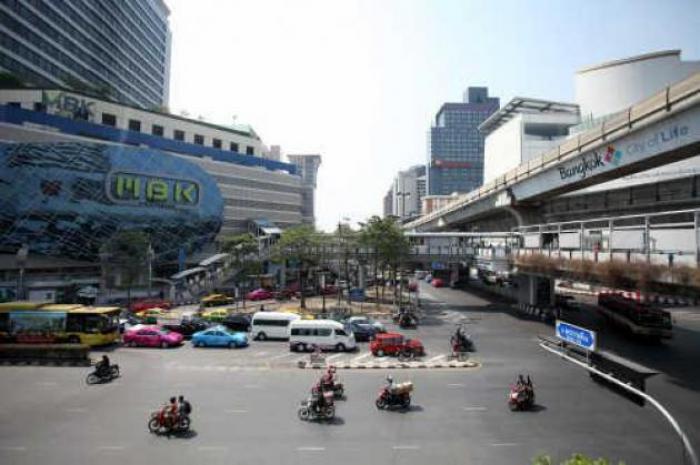 PHUKET: The Consumer Price Index (CPI) is likely to grow continuously in the following months because of the higher cost of raw materials and fresh foods amid rising concern over drought.

The Commerce Ministry reported yesterday that February inflation had edged up to the highest figure in seven months at 1.96 per cent year on year, mainly from rising food prices.

“The drought problem has created more concern over a rise in the prices of some foods, mainly fresh fruits and vegetables, rice and meat. Some goods prices may also increase as the weakening baht drives up the cost of some raw materials,” said Srirat Rastapana, permanent secretary of the ministry.

Inflation in February was up slightly, by 0.23 per cent, from the January figure. Combined inflation in the first two months was up 1.95 per cent year on year.

Last month, among the 450 goods and service in the ministry’s inflation basket, the prices of 199 items increased, while 75 items decreased in price and 176 were unchanged.

Prices in the food and beverage sector were up by 4.26 per cent on average compared with January’s figure, while those outside that sector increased only slightly, by 0.77 per cent, amid a slight drop in fuel prices.

Despite the rising trend of the CPI, the ministry is confident that annualised inflation will be within this year’s target of 2-2.8 per cent, in accordance with slowing economic growth, which is projected at 3-5 per cent.

Srirat said prices were expected to grow continuously in the remaining months, but should not be too high given the slowing economy, while the government had maintained its price-control policies.

The cap on the retail price of diesel fuel is due to expire next month, but she expects that the government will continue to subsidy the price. Otherwise, a higher pump price for diesel could increase inflation by 0.5-1 percentage point this year.

The Commerce Ministry also notes that an increase in the prices of tickets for Bangkok’s MRT subway system, scheduled for July, will mark up inflation by 0.002 percentage point this year.

PHUKET: The Finance Ministry continues making a strong effort to raise funds to pay farmers in arrears under the rice-pledging programme through the issuance of Bt20 billion worth of saving bonds despite the remaining doubts over their legality.

Meanwhile, the Commerce Ministry has accelerated sales of rice from the government’s stockpile to as much as 800,000 tonnes a month, hoping to earn Bt80 billion in nine months.

In the short term, there are only a few choices left for the government to obtain money either from the Farmers’ Assistance Funds announced last week or from the sale of rice to pay the farmers.

The Finance Ministry has failed twice to raise the needed money via short-term loans. First it held an auction for a bridge-financing loan of Bt20 billion from financial institutions. Then it called for bids for Bt20 billion in promissory notes for general investors. No one participated in either auction.

The main reason for the lack of bidders was the lack of assurance that a caretaker authority can legally raise funds via bond issuance. Another reason was that many state enterprises were reluctant to take part because of strong opposition from their employees.

“One of many ways to seek funds that the authorities are discussing is issuance of bonds. So far, there has been no conclusion on whether the Finance Ministry will guarantee the bonds. However, this is expected to be finalised in the next few weeks,” Luck Wajananawat, president of the Bank for Agriculture and Agricultural Cooperatives (BAAC), said yesterday.

The Commerce Ministry is expected to release about 800,000 tonnes of rice a month from the government’s stockpiles this year. It also expects China to sign another government-to-government contract with Thailand for rice purchase, while many other countries will order more from the Thai private sector.

According to a ministry source, China will this week sign a contract for purchase of about a million tonnes of rice. The contract will be signed by Chinese state-owned enterprise COFCO and the Thai Foreign Trade Department.

Previously, Thailand had to cancel a similar G2G contract with China, after that deal was suspected of being falsified and was investigated by the National Anti-Corruption Commission.

Srirat said Thailand should also be able to export more rice in the following months as many countries had placed orders with private exporters. Given the upcoming drought season, the government should be able to release more rice from the stockpiles, as many private traders needed it to supply foreign buyers, she said.

Meanwhile, the ministry has ordered the Thai Trade Representative in Indonesia to hold talks with that country’s Trade Ministry on reported dumping allegations against Thailand on the rice price.

PHUKET: The country’s economic outlook remains challenging if a new government cannot be formed by midyear and the export sector does not recover, some economists say.

Kasikorn Research Centre says that even though businesses can resume operating as usual now that the anti-government movement has ended its campaign to paralyse Bangkok and returned the streets to the city’s residents, Thai gross domestic product could shrink by 2 per cent this year if a government is not in place by the second half.

The research house has maintained its estimate for GDP growth of 3 per cent as it wants to wait to see how the political situation develops over the next two months, including the expected ruling by the National Anti-Corruption Commission on caretaker Prime Minister Yingluck Shinawatra’s handling of the rice-pledging scheme.

Pimonwan Mahujchariya-wong, deputy managing director of KResearch, said that if Parliament cannot be opened to discuss the fiscal budget by midyear, the economy in the second half would witness more trouble.

GDP in the first half could expand by 0.3-1.2 per cent year on year despite lower consumption, because exports will be a trigger of economic growth in the second quarter. But if exports are not able to resume healthy growth, there could be a recession, she said.