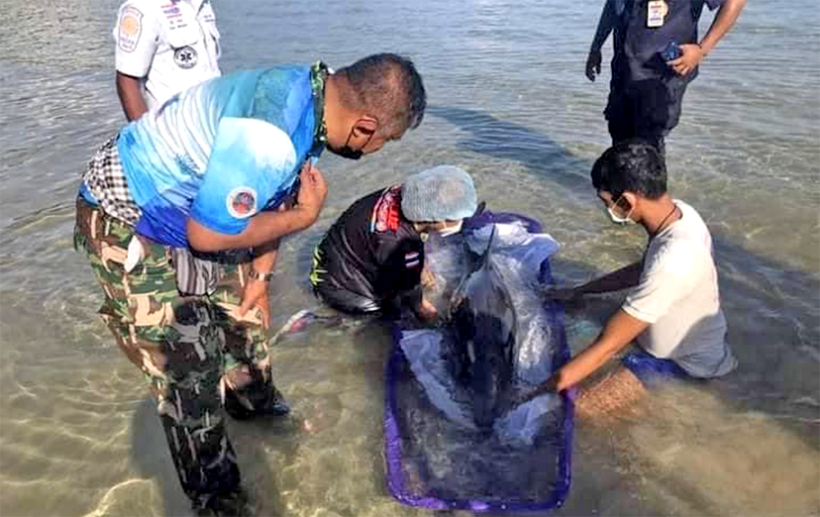 Tourists and locals at Phuket’s Nai Yang beach, near the Phuket International Airport, spotted a dolphin stranded and grounded in shallow waters this morning. The dolphin had 3 key injuries, one on its tail, one on its side, and one near its mouth. Thalang officials notified the head of Sirinath National Park about the dolphin after the tourists and locals called for help.

Rescue teams then rushed to give the dolphin first aid, lifting it onto a stretcher on the beach so that a marine veterinarian could examine it. The vet and the national park head both suspected the dolphin was likely wounded by a discarded fishing net. The vet told The Phuket News the dolphin was in a weak state, exhausted, but could still flap its tail. The rescuers then moved the dolphin onto a special rescue stretcher, and brought it to a rescue centre in Wichit.

The park head said he has now ordered park officers to regularly patrol the area and keep a lookout for dolphins that might be stressed or stranded.

Thailand struggles to protect its wildlife from human activities. This is particularly true of major tourist hotspots like Phuket. In December last year, more turtle nests were spotted in Phuket than were rarely seen in the days before the pandemic, according to the Phuket Marine Biological Centre.

A variety of different sea turtle species were spotted nesting and laying hundreds of eggs around the island throughout 2021. During heavy tourist times, nesting locations are limited, but with the peace and quiet, baby hatchlings can crawl out of their eggs and waddle down the beach to the sea.

Visa Options and Paying Tax as a Foreigner in Thailand