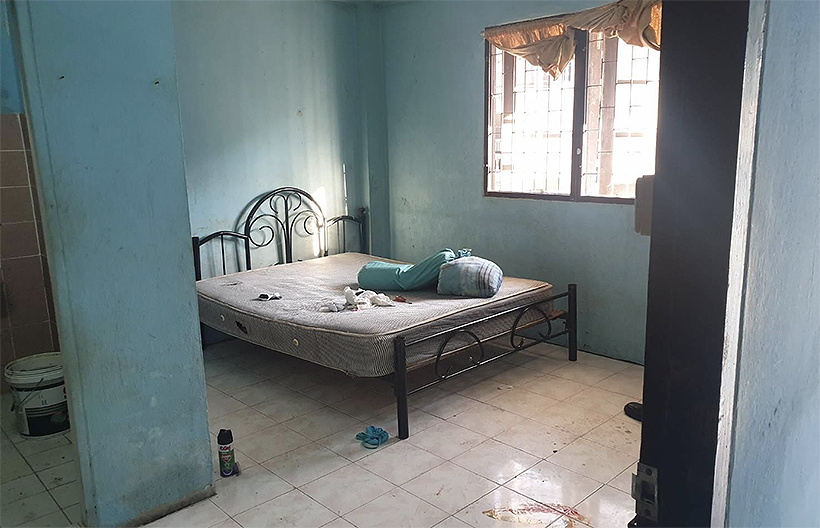 Pattaya police found a tourist dead in his rented room, lying naked near the door to his bedroom, near a large pool of blood. There were also spots of blood in the bathroom, and the man’s neck was reportedly wounded. The man’s name and nationality have not yet been reported, however officers from Pattaya Police Station believe he is 40-60 years old.

A maid and receptionist at the man’s residence told Pattaya police that the man had been staying for 3-4 days. She said she found out he had died when she went to check on him after he didn’t leave the room yesterday. The receptionist noticed a strong smell coming from his room, so she called her brother to help her open the door. They then found the man dead.

The receptionist says she didn’t know the man’s identity because the residence owner, who kept all the documents, could not be reached at the time. She added that the man had “no unusual behaviours”, and appeared healthy. She told police that the man had shown her his negative antigen test (ATK).

Even though there were very few belongings in the room, there were reportedly bottles, snacks, and garbage on a table in the room.

The body has been taken to the police hospital for an autopsy while the police continue investigating the man’s identity and circumstances of his death. The police are then set to contact the man’s embassy or consulate to find the man’s relatives.

The rental room is reportedly on Soi Chaiyapoon in the Bang Lamung district of Chon Buri province.

In February, another foreigner, a Korean hotel executive, was also found dead in his hotel room. The man’s sister told police her brother, who was 38 years old, had been healthy. His body was sent to Police General Hospital in Bangkok to be examined for the cause of death.

palooka
3 hours ago, kalyan said: pathetic condition of the room to stay, is this for visitors !! Thai Pass SHA plus for problem tourists maybe.
TWS60
As macabre as it is, the return of articles about dead farangs in Pattaya suggests tourism is rebounding. 🥴