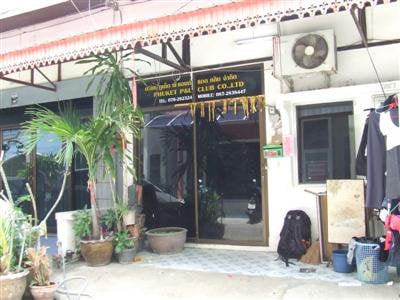 PATONG, PHUKET: Kathu Police are treating as a ‘probable suicide’ the case of a Vietnamese man found hanged to death in his rented home in Patong early Monday morning.

The corpse was identified as that of 26-year-old Huynh Tan Phong, shown in his passport as a resident of Thua Thien-Hue province in Vietnam.

The body of Mr Phong, wearing white pajamas, was discovered at about 8am by a business partner who had come to awaken him.

The corpse was found hanging by the neck from a staircase inside a two-story shophouse on Soi Jareornsap, near Patong Municipality offices.

The apparent suicide was carried out using a pair of pajama bottoms.

Workers from the Kusoldharm Foundation who took Mr Phong’s remains to the Patong Hospital morgue said the hanging was probably carried out not long before the discovery of the body.

Kathu Police investigators including duty officer Jongserm Preecha initially suspected foul play because Mr Phong’s hands were found bound together behind his back with a belt.

However, upon questioning a witness described as the deceased’s sister, police learned that Mr Phong had been under a great deal of stress recently due to financial difficulties and had talked about ending his life.

Mr Phong ran an outdoor shop selling leather bags behind Jungceylon in Patong until his death.

His relatives seemed resigned to the fact that he had taken his life, police said.

As an inspection of the body and the shophouse found no evidence of foul play, police are now treating the case as a probable suicide, Maj Jongserm said.