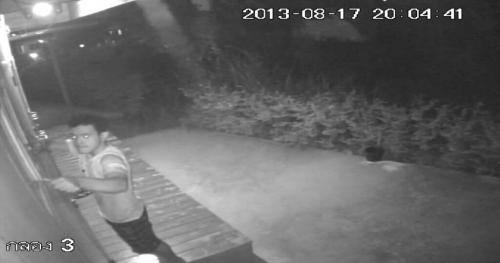 PHUKET: A reward of 5,000 baht was offered this morning for any information leading to the arrest of a thief who is believed to have broken into the Democrat Party Phuket office not once, but twice this month.

In addition to robbing the office of an undisclosed amount of money, the thief also vandalized the interior.

The office is located on Thepkrasattri Road in Srisoonthorn

“On August 2, we found the office door broken and the interior of the office destroyed,” Thalang Police Deputy Superintendent Amnuay Kraiwutthianun said.

Watcharin Areerob, a secretary of Phuket Democrat MP Rewat Areerob, told the Phuket Gazette that money was also missing from the office, but declined to say how much.

Then, on August 17, someone broke into the office through a restroom window – police believe it was the same perpetrator as the one who broke in on August 2.

“The thief was caught on CCTV on August 17,” Mr Watcharin said. “The footage shows him breaking in through the window and stealing a computer.”

“Anyone with information that might lead to the arrest of the thief can call me on my personal number at 081 892 9179,” Lt Col Amnuay said.