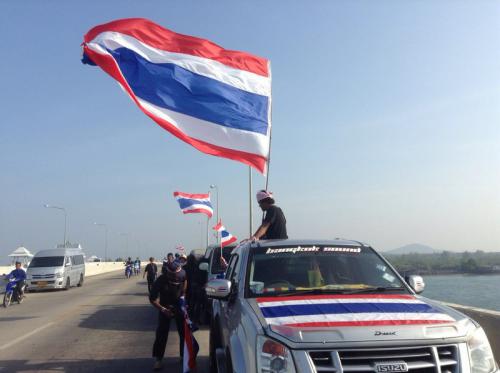 PHUKET: The body of Prakong Choochan, who died from injuries sustained when an explosive device was thrown at anti-government protesters in Bangkok, was welcomed home to Phuket by over 100 people lining Thepkrasattri Road this morning.

The crowd waved Thai flags and blew whistles as his caravan passed by.

“The body left Bangkok at about 9pm last night, escorted by two vans and four trucks. A few more vehicles joined the procession when it passed through Phang Nga this morning,” Amnuay Kumban, the leader of the anti-government protests in Phuket, told the Phuket Gazette.

The caravan crossed over Thepkrasattri Bridge (map here) at about 9:20am.

“We were close. Mr Prakong was a very good man. We had been fighting together for Thailand for years,” Mr Amnuay said.

“He used to say that he did it all for the country, because he couldn’t accept Thaksin taking over everything. We agreed that we would not stop until we had won.”

Former Rassada Mayor and protest co-ordinator Suratin Lian-udom was at the bridge this morning to meet the motorcade.

“Mr Prakong died pursuing his desire to free us from Thaksin,” he said.

“His death will drive us forward. We will not stop until we win.”

Phuket Governor Maitri Inthusut and his wife Pavinee Inthusut visited Mr Prakong’s family over the weekend to give their condolences and to offer financial assistance, as did Anchalee Tephabutra, the longstanding Phuket Democrat MP (story here).