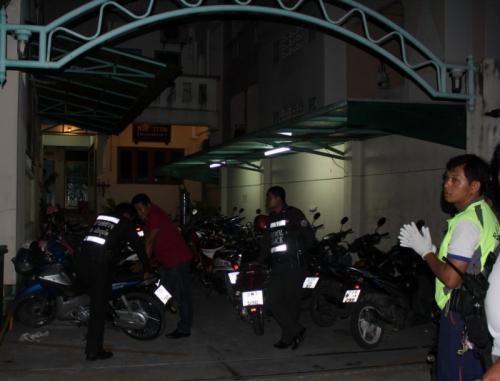 PHUKET: A Phuket Tourist Police officer is in hospital this morning recovering from wounds sustained after a gunfight in a neighbor’s room which left two men dead early this morning.

Sen Sgt Maj Pinchai Piyadilok was shot in the leg and in the stomach in the incident, and is recovering from surgery. Police have yet to question him.

They arrived to find the body of Saran Chaithum, 26, from Nakhon Sri Thammarat, leaning against the open door to the room.

In the bed was the body of Chalermpol Tripuk, 26, from Trang.

Both had been killed by gunshots to the body.

Police found one survivor at the scene, Natthapong Kaewkuanchum, 25, from Nakhon Sri Thammarat.

“He had been shot three times in the chest,” Phuket City Police chief Col Sermphan Sirikong told the Phuket Gazette.

Mr Natthapong was rushed to Vachira Phuket Hospital, Col Sermphan added. He too is recovering from surgery and has yet to be questioned by police.

“In the room, we found two 9mm cartridges, two bullets and crushed kratom leaves on the floor,” he said.

“We are questioning the neighbors and the apartment owner. When possible, we will also question those injured in the attack. We hope to have some answers soon,” Col Sermphan said.