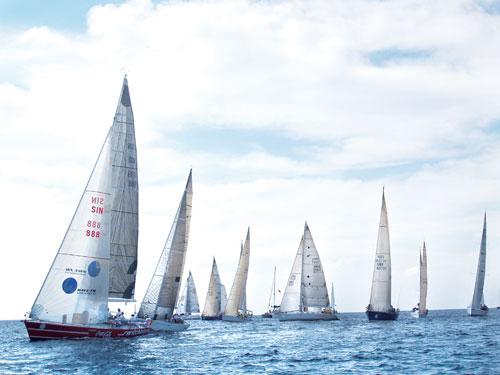 PHUKET: It was in June, 1986, when a number of leading lights in the Thai sailing fraternity came together with an idea: A Regatta for our King who would turn 60 the following year and the regatta to be held in Phuket, previously untouched by a sail-fest of such significance.

Logistics were a determining factor in the early days. For example, what types of boats, race management, safety and security, approval of the Provincial Government and, of course, a petition to HM the King to bestow his blessing, as Royal Patron of the new venture and to graciously bestow the permanent King’s Cup Regatta trophy.

It was certainly the determination, generosity and vision of Mom Tri which were the major contributions to raising the regatta to its now highly-regarded, world-class status.

Initially, at the opening of the first event in 1987, a motley collection of itinerant keel boats and catamarans, based in, or passing through, Phuket, dinghies shipped overland from the Royal Varuna Yacht Club at Pattaya and various other craft, such as those berthed at various centers around Phuket’s shores, were cajoled into joining in.

Logistics were a major problem, with the fleets divided into three main centers, ranging from Nai Harn Bay, the Meridian, the Club Med and the Pansea Resort in Surin in the north.

There were keelboats, beach-launched and ocean-going catamarans, Laser dinghies and even wind-surfers. Over the years, many of these classes were dropped, due to difficulties of transporting, race management, security and safety. Such trivial inconveniences soon appeared. For example, all mooring and anchor lines for course markers which had been offered by the Royal Varuna, were too short. The average depth in the Northern Gulf where this equipment was used in race management was only some 20 meters. Around Phuket, the average depth was more like 50 meters.

Fortunately, with great support from the Royal Thai Navy, safety was never compromised – continuing through to the present.

Many of the competitors over the years have become “Regatta Recidivists”, coming back year after year from the four corners of the world to take part in this marvelous festival of yacht-racing and beach life a la Phuket. In some cases, it is “simply to forget about life for a while”, in the superb, stress-free ambiance of Thai-land’s island province.

Throughout the almost three decades of the regatta, fleets change and, now, with so much interest in sailing and yacht-racing among Thailand’s juniors, competing at world championships, the regatta committee has installed the Phuket Dinghy Series which has inspired youth in Southern Thailand to take up sailing since its introduction in 2010.

It has featured in four Phuket King’s Cup Regattas and serves to empower the progression of youth sailing. The Series has become a sailing clinic that has gained in popularity among youth sailors (under 15 years old) for its solid coaching content and the friendship amongst participants from various sailing clubs.

This year, the Phuket Dinghy Series enters its fourth successful year and is sponsored by PTT Global Chemical. The company is endorsing the development of youth sailing and shares the vision of young sailor training as these competitors represent the future of sailing sport in Thailand. PTTGC has recognized the program as a practical starting point to bring sailing closer to the hearts of more Thai people.

Kevin Whitcraft, President of the Phuket King’s Cup Regatta Organizing Committee, said, “The Phuket Dinghy Series brings many new Thai sailing talents into the arena of competitive youth sailing. It serves as an accessible means of competition for young sailors from many sailing clubs in Phuket, Phang Nga, Songkhla, and as far as Chonburi, in order to prepare them for the International Stage and the Phuket King’s Cup Regatta. I would like to thank our sponsor, PTT Global Chemical, for their highly valuable support of the Phuket Dinghy Series, and the company’s assistance in growing the awareness of sailing sport in Thailand.”

Bowon Vongsinudom, President & CEO of PTT Global Chemical, said, “PTT Global Chemical is pleased to support Thai youth sailors and the Phuket Dinghy Series as part of the prestigious Phuket King’s Cup Regatta. Sailing is a sport which is exciting, sustainable, environmentally friendly and increasing in popularity in Thailand. As part of our CSR commitment to providing support to trustworthy, social responsible projects, we are delighted to be the main sponsor for the Phuket Dinghy Series.”

The first series of the 2013 Phuket Dinghy Series was held from October 5-6 at Naiyang Beach Resort; the second series was sponsored by The Kriss Resident Bang Tao over October 26 to 27. The final races, hosted at Panwa Bay by the Third Naval Area Command, Royal Thai Navy, were postponed due to unfavorable weather.

The Phuket Dinghy Series is now an integral part of the Phuket King’s Cup Regatta, and winners of each class will receive a Royal Award which is to be presented along with other Regatta class winners at Kata Beach Resort and Spa on December 6, 2013. His Majesty the King’s personal representative Admiral Usni Pramoj, will preside over the Awards Ceremonies. M.L. Usni, himself, is also a “Regatta Recidivist”, having officiated at all regattas, with the exception of 1988 and 1989.

Each year, the overall Regatta winner, receives the splendid permanent trophy, designed by Mom Tri Devakul. The trophy is impregnated with the number Nine, representing His Majesty as the Ninth ruler of the Chakri Dynasty. Nine “sails” in burnished metal, emanate from a silver column placed upon a base mirroring the sea. Atop this vertical column, is a replica of the symbol of the King, known in Thai as the: Tra Sanyalak”, emblazoned with His Majesty’s initials and topped with the royal crown. The whole edifice is mounted on columns of ash-wood, carved with the regatta’s title.

When one looks at pictures of the famous – and quite ugly -“America’s Cup” trophy, fought over for almost 160 years, In the hallowed halls of international yacht racing, the Phuket King’s Cup Trophy stands out as a work of art, fashioned by a man with a most artistic temperament.

So, the 2013 Phuket Regatta is set to start, with upwards of 100 entries and, the International body which controls such big events, has approved three judges from the America’s Cup judging panel “La crème de la crème” on the world scene.

So, this is, at best, a “mini-overview” of the regatta which has placed Thailand – and Phuket –in the vanguard of big world events.

Sights set on a Safer Phuket