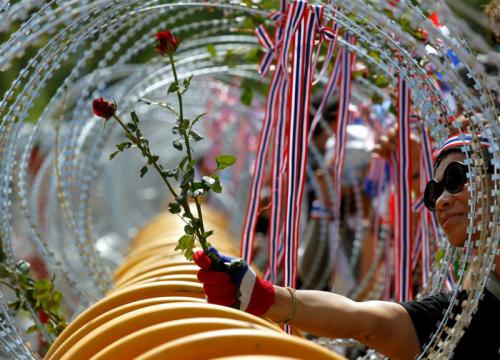 PHUKET: In a symbolic move, hundreds of anti-government protesters stormed the Army headquarters on Rajdamnoen Nok Road yesterday and briefly occupied the lawn of the headquarters.

The move was one of the more dramatic moments in their campaign to topple the Yingluck Shinawatra government.

Protesters led by leaders of Students and People Network for Thailand’s Reform started marching from their base in Nang Lerng at around 11:30am and arrived outside the Army office around noon.

About 80 men standing hand in hand gathered and pushed down the front gate. Some climbed over the gate. The protesters were warned by their leaders not to break into any buildings or offices. They gathered on the front yard of the army headquarters building with many posing for photographs within the grounds. Former yellow shirt leader Chamlong Srimuang and Pajun Tamprateep, a former close aide to Privy Council President Prem Tinsulanonda were seen at the site.

Leader Uthai Yodmanee took a stage on a truck and demanded Army Chief Gen Prayuth Chan-ocha and the army to declare what side it is on.

A representative of the Royal Thai Army told the protesters the military would not use any force against the protesters. Moreover, the military had prepared first aid kits and drinking water for the visitors. The protesters later submitted a letter to the Army’s commander-in-chief and left the site around two hours later to return to their base.

Meanwhile, thousands of protesters composing members of the Business Club for Democracy, as well as alumni and current students of many educational institutes gathered at about 11am at Asoke Skytrain station before marching to the US Embassy.

Democrat leader Abhisit Vejjajiva and former finance minister Korn Chatikavanij joined the rally. Posting a photo of himself riding on the Skytrain on his Facebook page, Abhisit said “See you at Asoke.”

They then marched to the US Embassy on Wireless Road. The protesters waved placards, some of them said “Stop serving Thaksin regime”, and “Get Out, Thaksin’s servants”. People along the road took photos, blew whistles and waved the national flag.

At the US embassy, protest representatives submitted a note to the US government, saying that the Yingluck government was not legitimate.

Police stepped up security at the US Embassy earlier out of fear that a third-party group may use the confusion during the protest to attack the embassy.

Police were deployed from the Metropolitan Police Division 5, Lumpini Police station, Special Branch Police, the 191 Task Force and Arintharat commando unit to guard the embassy from early in the morning. Police also guarded the US ambassador’s residence and the consular office.

In another rally, a group of people who called themselves “patriots” led by Srivara Issara, the owner of Charn Issara building began a cheerful parade heading to the headquarters of the Pheu Thai Party. About 300 police were deployed outside the party office after protest leaders announced their plan.

OPINION: For Pheu Thai, replacing Yingluck is not an option
The Nation / Phuket Gazette

If not Yingluck Shinawatra, then who? This is the question haunting the Pheu Thai Party right now. From being a heroine ushered onto centre stage in a highly romanticized manner, PM Yingluck has seen her popularity plunge as fast as it initially skyrocketed. The amnesty push, according to a host of non-partisan commentators, was a political blunder on a scale rarely seen. Her innocent and conciliatory image had shielded her from accusations she was her older brother’s “puppet”, but the scandalous rush to pass a bill that would absolve him (even albeit along with his political enemies) has stripped her of that immunity.

Polls indicate that few people believed Yingluck when she vowed to bury the amnesty agenda. Although some protesters have returned home, the dents to her image could turn out to be permanent. A juxtaposition of incidents has made it difficult to take her pledge seriously, meaning she’s got a lot more to do to convince the growing number of doubters. The just-ended censure debate did not help that cause.

First came the leaked audio clip in which Thaksin discussed a legislative and executive plan to bring him home. Then an amnesty bill that had not originally included him was altered to do so. Last but not least, the Pheu Thai-dominated House of Representatives rammed the revamped bill through after just one day of debate – or opposition protest, to be exact. Through all of this, Yingluck tried to stay aloof. She began by insisting that amnesty had nothing to do with the government, only to take a dramatic and questionable U-turn by finally saying the government was “withdrawing” the bill.

If Yingluck is a “puppet”, she has not done a good job in the role. If she is not a puppet, she is bad at proving so. Being Thaksin’s sister has made her task difficult, of course. But that doesn’t mean a bill advocated by her party and paving the way for him to return home a free man had to be rushed through Parliament at an hour when much of Thailand was sleeping.

While Yingluck’s political “innocence” was winning hearts, attacks ricocheted off her without fail. Now, scepticism has eaten into her image and the previously harmless ridicule by rivals is taking a bigger and bigger toll. She is politically bruised and obviously anxious, prompting speculation that her brother might have to prop somebody else up in her place.

The question is, “Who?” The other influential Shinawatra sibling, Yaowapa Wongsawat, has always been mentioned as a replacement candidate, but switching from Yingluck to her would be a drastic change. Yaowapa is far more confrontational, and certainly doesn’t command as much public adoration as the incumbent.

Will Somchai Wongsawat, Yaowapa’s husband and a former prime minister, be brought back? Though he doesn’t seem confrontational, his active involvement with the red shirts would certainly bring him more torrid times as premier. Suvarnabhumi Airport was taken over by protesters while he was at the country’s helm in late 2008 – and that was at a time when Thai politics was not nearly as complex or super-heated.

Any other candidate deemed closely associated with the Shinawatras would face big trouble. Giving the highest executive post to an ally of Pheu Thai is also unthinkable. The late Samak Sundaravej was as far as Thaksin would go when it came to a non-Shinawatra at the country’s helm. It’s unimaginable for the prime minister’s post to be handed on a plate to, say, Banharn Silapa-archa.

The national impasse seems to have brought Pheu Thai to a major impasse of its own. Can Yingluck continue? That’s a big question, but the bigger ones are “If not House dissolution, then what?” and “If not her, then who?”

PHUKET: Democrat leader Abhisit Vejjajiva has suggested that he is ready to become a leader of the anti-government protest if former Democrat MP Suthep Thaugsuban is arrested.

Asked if he was