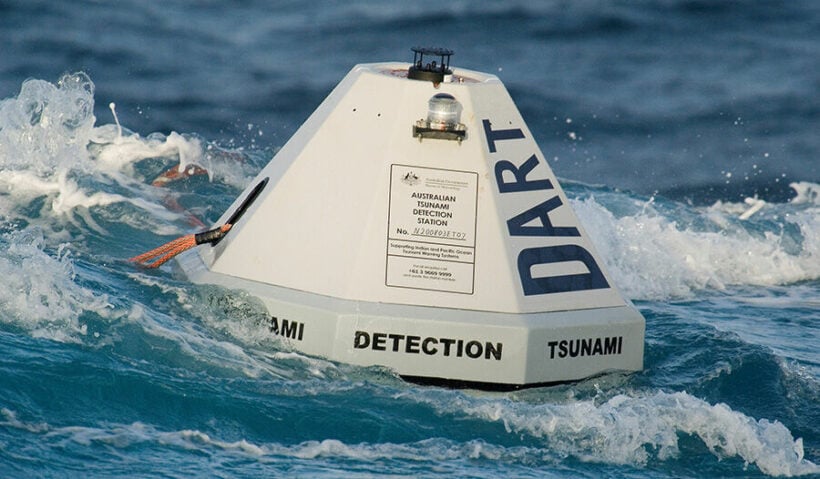 Thailand’s Disaster Prevention and Mitigation Department has admitted that 2 tsunami detection buoys are out of order, but insists they will be repaired soon. The department was forced to issue a statement following widely-shared news on social media that the buoys were out of order. According to the reports, both buoys had stopped submitting information to the National Data Buoy Centre website, which is run by the National Oceanic and Atmospheric Administration in the US.

According to a Nation Thailand report, a statement issued by the DPMD says 1 tsunami buoy (known as “Station 23401”) had been deployed in the Indian Ocean, around 965 kilometres west of Phuket. The other (“Station 23461”) was positioned in the Andaman Sea, around 340 kilometres off the coast.

Officials say both buoys were being properly maintained every 2 years, as per NOAA standards, but that on October 22, Station 23401 was swept away from its location and stopped emitting a signal. That buoy was subsequently recovered and a replacement is expected to be deployed by November.

The DPMD says that on May 21, officials noticed that Station 23461 in the Andaman Sea was sending out irregular data and NOAA stopped submitting the data to the National Data Buoy Centre until an investigation could be carried out. According to the DPMD, officials checked the data from the Andaman Sea buoy, realised it was once again sending correct information, and so transmission to the NOAA website resumed.

According to its statement, the DPMD has been regularly monitoring the buoys and using overseas data to analyse the tsunami risk for Thailand. Officials say they remain confident in their ability to issue timely warnings of any impending tsunami threat.

HiuMak
Will have to rely on the birds to run from the Tsunami this year.
Alwasel
Subsea and surface PPM's are required on these buoys to avoid this happening.
Prosaap
Officials say they remain confident in their ability to issue timely warnings of any impending tsunami threat.   as long as its not before november it make me laugh but its really very sad it shows one more time how…