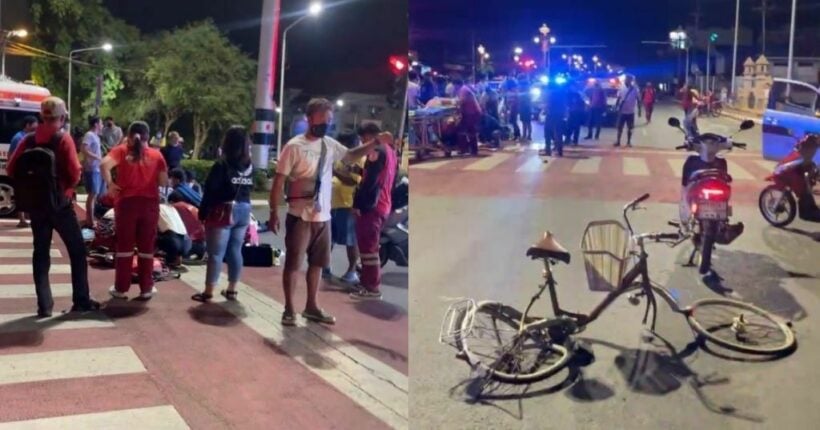 A young French woman was killed in a road accident in Ayutthaya province in central Thailand yesterday evening. The 26 year old tourist got confused at an intersection when a green and red light shone at the same time, leading her to drive into oncoming traffic. A man driving a sedan through the green light couldn’t break in time, striking and killing her.

Officers from Phra Nakhon Si Ayutthaya Police Station arrived at the scene alongside a rescue team to find 26 year old Camille Jeanne Gavaudan in a critical condition lying next to a broken bicycle on a zebra crossing. Camille was taken to hospital where she later passed away from her injuries.

The woman’s friend, 34 year old Tara Nico Scuri, told police the pair had rented bicycles on Tuesday to travel around tourist destinations in Ayutthaya. When they were cycling back to their hotel last night, Tara said they got confused by the lights at the intersection.

The women were trying to cross the road at a zebra crossing, when they saw both a red and green light shine at the same time. They thought the red light would stop cars from every lane, so they crossed the road. An oncoming car couldn’t break in time, hitting Camille, but missing Tara who came out of the incident with no injuries.

The 42 year old sedan driver, Satapana Kumsopa, told police he was driving home last night when he arrived at the intersection, saw the traffic lights were on green, so continued driving straight. He said the red light was for cars who wanted to turn right. He saw the two foreigners on their bicycles, but couldn’t stop his car in time. He said he was sorry for the incident and wants to apologise to the woman’s family.

The police said Satapana could be charged with reckless driving causing death if their investigation finds him to be at fault.

The woman’s body has been taken for an autopsy at Thammasat University Hospital. The police coordinated with the French embassy to inform Camille’s family of her death.

Chilli
I have lived in Ayutthaya for 15 years , this main road is very dangerous, it’s confusing, the two inside lanes are green permanently, to allow flow , the right junction has two arrows pointing right on the tarmac (…
Viggen8408
There was a lot of video on the news last night, including dashcam from the vehicle involved. Unless the video speed was increased, he was going way too fast for the conditions... and duty of care. I KNOW that means…
Vance
Go ahead, call cycling in Thailand suicidal if you want. Depends how, when, and where you ride. I feel awful for this French girl's family, but this was not safe cycling. Of course the driver appears to have been going…

Pinetree
On 5/26/2022 at 5:58 PM, Chilli said: I tried to cross on a zebra crossing smack outside Ayutthaya main hospital Note to everyone: there are no zebra crossings in Thailand. They may have the markings, but those markings are meaningless.

Poolie
Well, you don't see that many zebras do you? 😄