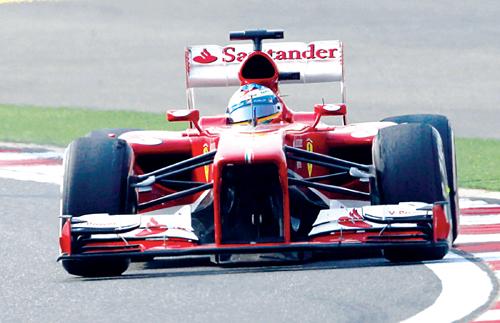 PHUKET: Before Shanghai, I predicted correctly that Kimi Räikkönen and Fernando Alonso would be on the podium, but who would be the third driver to join them? In the event it was Lewis Hamilton, but in truth it could have been any driver in the first half of the field (click here for article).

If only Felipe Massa’s car had not had such a problem with the medium tyres; if only Nico Rosberg had not suffered from understeer; if only Mark Webber’s wheels had all stayed attached; if only Jensen Button’s engineer had got the strategy right to allow him that third pit stop; if only Adrian Sutil had not hit teammate Paul di Resta; if only Daniel Ricciardo had not had to stop for a new nose, and so on.

Strategy was the key to Shanghai, and that has annoyed some old Formula 1 speed heads. But we haven’t seen such exciting wheel to wheel racing for ages. Surely no one wants a return to the dark Schumacher days when he won everything just by having the fastest car, and being prepared to do anything to win?

The medium tyre proved very effective at the beginning of the race when cars were pregnant with fuel. This was so important that those who started on the soft tyre pitted to change boots as quickly as possible.

There was an abundance of overtaking, because strategies required drivers to pass as many cars as possible to gain track position before the next pit stop. Button and Vettel opted to run the soft tyres at the end, which was wrong but gave an electrifying duel all the way to the chequered flag.

So, we had the third winner out of the three races for the season; with world champions holding all top five places at Shanghai. The results initially remained provisional, pending a series of judgements over the use of DRS (drag reduction system) under yellow flag conditions.

Vettel, Webber, Räikkönen, Valtteri Bottas, Daniel Riccardo, Button, Romain Grosjean and Max Chilton were all told to explain themselves after the race. But the stewards accepted that there had been a “degree of confusion” relating to the FIA’s telemetry system, which has been problematic since appointing a new supplier this season. The telemetry system was partially disabled in Shanghai, so race officials could not centrally control DRS as in previous seasons. This was compounded by a one minute delay before yellow flag warnings appeared on drivers’ steering wheel display units.

Last week I asked several questions. Could McLaren possibly get it together? Well – nearly. Could Force India be a force to reckon with? I think they could, if they stop hitting each other.

Lotus was back to form, and Kimi Räikkönen took second even with a broken nose and wing.

In the Red Bull soap opera ‘Milton Keynes’, Webber could be forgiven for feeling paranoid. He was penalized because his team provided him with insufficient fuel during qualifying, so he started from the pit lane, then he was hit by a sister team Torro Rosso, and finally his wheel fell off in the race.

Meanwhile, Vettel ramped up the tragi-comedy by announcing that he feels no need to apologize for his behaviour at the Malaysian GP. “I don’t apologize for winning,” said Vettel. “I love racing so, yeah that’s what I did.”

It seems Vettel thinks he, possibly with Helmut Marko, is in charge of Red Bull. Maybe he is.

And so it’s on to Bahrain, where Pirelli is providing hard and medium compounds for a circuit dominated by long 300 km/h straights and slow corners. So, brakes will play a significant role. Bahrain demands superb aerodynamics with sturdy low speed traction.

The desert location means track evolution is uncertain, depending on how much sand blows onto the circuit. High temperatures provide a real challenge to cooling systems and tyre management, with heavy demands on rear tyres as opposed to Shanghai where the front left tyre took the brunt of the track attack.

I continue to believe, barring accidents, that three time winner Alonso will triumph, followed by Räikkönen. That elusive third man on the podium could be almost anyone again. JB, Vettel and Massa have all won here before, and Webber, Hamilton and Paul di Resta must all fancy their chances.

Join me by the big screen at Phuket’s Green Man, Chalong (click here for map) on Saturday at 6pm for the qualifiers and on Sunday at 7pm for the race.