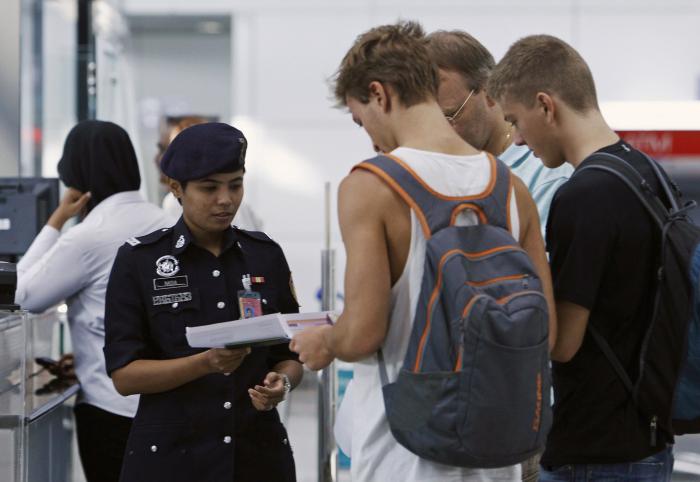 Passports stolen in Phuket that were used to board ill-fated Malaysia Airlines Flight MH370 have placed Phuket in the center of an international maelstrom. Thousands of passports are reported lost or stolen in Thailand each year, and the region is gaining a reputation as a gateway for international asylum seekers to reach Europe.

PHUKET: Investigations into the disappearance of Malaysia Airlines Flight MH370 led to the discovery that two men boarded the plane with passports stolen in Phuket (story here) – raising fears that a terrorist attack brought the plane down and claimed the lives of the 227 passengers and 12 crew on board.

The men were later identified as Iranian nationals Pouri Nourmohammadi, 18, and Delavar Seyed Mohammadreza, 29. Mr Nourmohammadi was en route to Frankfurt, Germany, where his mother lives, while Mr Mohammadreza was on his way to Copenhagen.

After days of investigations, the Malaysian Police, Thai Police and Interpol Secretary General Ronald Noble all made statements concurring that investigators do not believe the two men had any links to terror organizations.

The men had started their journey in Doha – and were flying halfway round the planet and back again to get to their destinations – leading officials to believe that they were attempting to illegally immigrate to Europe under the cloak of their newly acquired passports.

The international spotlight shining brightly on the plight of the mysteriously missing aircraft spread its beam to reveal to the world the extent of the illegal passport trade in Thailand – and specifically Phuket as a source of stolen passports.

With huge numbers of visitors and patchy law enforcement, Thailand has a booming black market for fake identity documents. Thai authorities struggle to track thousands of lost or stolen passports each year.

Some are known to be sold on through syndicates to drug traffickers. Others are suspected to have ended up in the hands of Islamist militants.

They are passed on to middlemen, Thai or foreign, who work with criminal networks, he said. The passports may be altered, for example with a new photograph, but sometimes the fraudulent user hopes to pass as the real owner.

The passenger manifest issued by Malaysia Airlines included the names of two Europeans – Austrian Christian Kozel and Italian Luigi Maraldi – who were not on the plane. Both had passports stolen in Phuket (story here).

The passports were used to buy tickets from travel agents in Pattaya, for flights to Beijing and on to Europe. Thai and foreign investigators were questioning staff at one travel agency on Monday.

Police showed Reuters a copy of Mr Maraldi’s passport used to make the travel booking with what was apparently the original photograph of Mr Maraldi in it. It was not immediately clear if the tickets were bought online or collected.

Thailand’s fake document business has been flourishing for years.

In 2010, Thai and Spanish authorities arrested suspected members of an international ring providing forged passports to militants. Thai authorities say the ring may have passed fake documents to those behind the Madrid train bombings in 2004.

“Thailand is fertile territory for people looking to steal European passports. There are lots of foreigners and many foreigners visit,” a European diplomat said.

The Ministry of Foreign Affairs said more than 60,000 passports – both Thai and foreign – were reported missing or stolen in Thailand between January 2012 and June 2013.

Phuket Police said they get reports of up to 10 lost passports a month in the province.

Capt Angkarn Yasanop at Phuket Immigration said foreigners can make more than 6,000 baht by selling their passport and then reporting it as stolen. Many lost or stolen passports end up with Thais and other Southeast Asians trying to migrate for work, he said.

Crooked operators then make a false allegation of damage to the vehicles. The tourist, unwilling to pay, forfeits the passport and reports it stolen at an embassy or consulate and gets a new one. The old passport is sold into the underworld.

“Phuket has some very, very unsavory characters and they’re not all Thais,” Mr Cunningham said. “Nothing would surprise me about Phuket.”

“The bad news is that, despite being incredibly cost effective and deployable to virtually anywhere in the world, only a handful of countries are systematically using SLTD to screen travelers,” he told a conference last month.

“The technology we use in Thailand to check fraudulent identity cards is outdated at many points of entry,” he said.

The outdated passport-checking equipment used by Thai officials saw six other travellers – four Syrians and two Lebanese men – slip through immigration at Phuket International Airport with Greek passports to board a flight to Beijing in January (story here).

The incident highlighted the growing trend for illegal immigrants – asylum seekers or not – to travel to Asia and then on to Europe in the hope of repatriating there.

Chinese officials returned the six men – all believed to be genuine asylum seekers – to Phuket after identifying the passports they were using as fakes.

The men remain under house guard at Phuket International Airport awaiting deportation to a safe destination.

“They left Syria by taking a car to Lebanon without passing through an immigration checkpoint,” explained one airport immigration officer who asked not to be named.

When the men arrived in Lebanon, they were denied 60-day tourist visas by the Thai embassy there.

“There were concerns that if they were allowed to enter Thailand, they would not leave due to the ongoing civil war in their home country,” the officer said.

The men somehow acquired six fake Greek passports, then boarded a flight from Lebanon to Doha and finally arrived at Suvarnabhumi Airport in Bangkok by Qatar Airways on December 31, he explained.

The route taken by the refugees was nearly identical to that of the two Iranian nationals who also began their journey in Doha.

“Our records show the six men