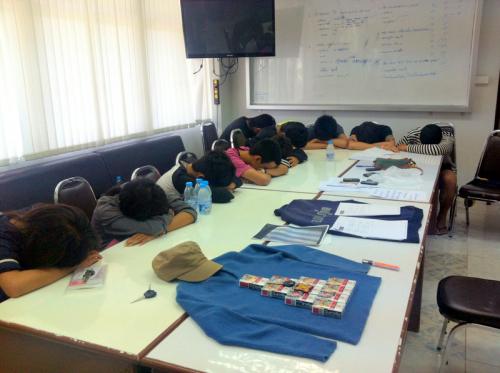 PHUKET: Four members of a teenage gang have been charged with attempted murder after a Burmese man was seriously injured in a knife attack in Phuket Town early yesterday morning.

The gang of 10 were riding motorbikes along Tilok U-Thit Road (map here) at about 1:30am when four of them took umbrage with a Burmese man riding his motorbike with a sidecar in the wrong direction down the street.

“They turned around and forced the man to stop. An argument broke out and one of the teenagers stabbed the Burmese man three times before the gang raced off,” explained Phuket City Police Deputy Superintendent Prawit Engchuan.

The injured man managed to get to a nearby Family Mart convenience store and plead for help.

“At about 5:30am, our officers stopped six of the gang members riding motorbikes at Saphan Hin. We were looking for the ‘slap attack’ gang (story here),” said Lt Col Prawit.

The officers brought the teens in for questioning, and all six were identified from CCTV footage taken in front of Family Mart as having been at the scene of the stabbing.

“They denied they were involved in the attack, but confessed that four of their friends did it,” Col Prawit said.

By 11am yesterday, police led by Col Prawit arrested the four suspects at a house in Wichit.

All 10 continued to deny being the slap attack gang until, after a further five hours of questioning by police, they reportedly confessed to carrying out the public attacks early yesterday evening, Col Prawit told the Phuket Gazette.

“The four teens were charged with attempted murder. They confessed to the charges,” Col Prawit said.

“The Burmese man suffered serious injuries in the attack. He is now recovering in hospital, and is no longer in critical condition,” he added.