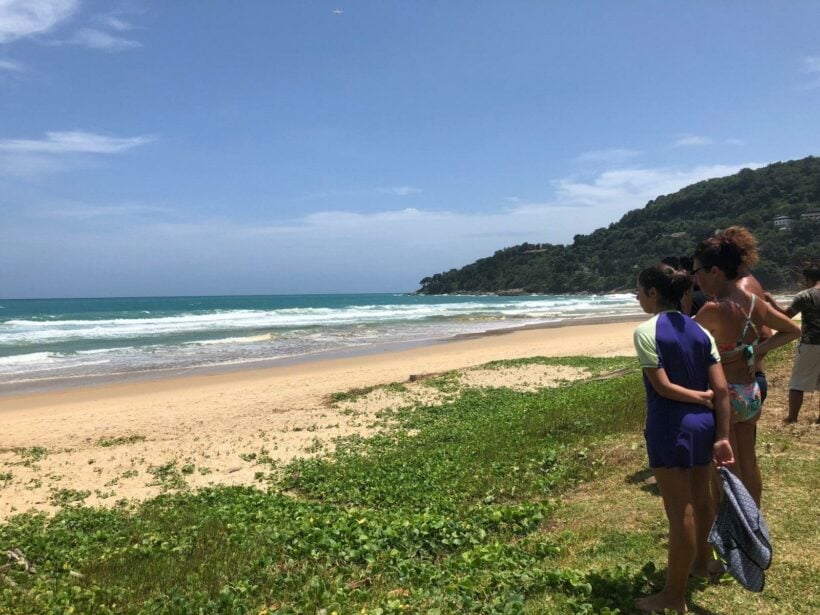 A “crocodile catching operation centre” has been set up at Karon Beach on Phuket while the professional crocodile catchers from Surat Thani are still battling with strong winds and waves to find the elusive reptile. Beachgoers have been walking along the beach instead of being allowed to go into the water.

The crocodile was last officially seen early yesterday morning (July 22) lying on the beach at Karon with ongoing attempts to capture it to no avail. Estimates of the creature’s size have been variously reported from 1.2 – 2 metres. Latest photographs and video suggest the reptile’s size at around 2 metres.

Alerted of 3.30am sighting Sunday morning, the Kraithong crocodile hunting team was immediately rushed to the scene where they found the crocodile apparently resting on the beach. But as they tried to approach the reptile to make the capture it sprang into the sea as the team tried to cast a net.

Yesterday, about noon, the crocodile showed up several times in the water.

Karon Deputy Mayor Tawee Tongcham says, “We are patrolling along the beach. Warning signs have been set up to prevent swimming near the area where crocodile was last seen. More nets are being prepared to catch the crocodile. Boats and jet-skis are also being used for patrolling the seas off Karon Beach. We have to be very careful as the weather conditions whilst mostly sunny, are quite rough with a 2 metre swell.”