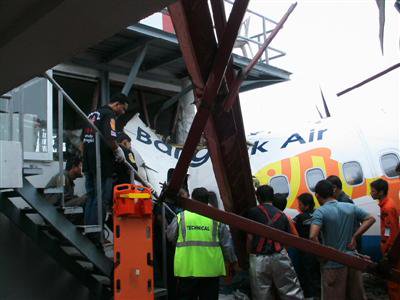 The first departing flight was Bangkok Airways PG100, which took off at 2 pm, bound for Bangkok’s Suvarnabhumi Airport.

The co-pilot of the Bangkok Airways flight that crashed into an abandoned control tower yesterday afternoon remains in critical condition at Bangkok Hospital in the capital. He will undergo surgery on his chest and abdomen tonight, the hospital announced.

He suffered multiple bone fractures, a broken right arm, broken left hip, and a broken rib that pierced through his right lung, causing internal bleeding in his abdomen.

His liver was also torn from the impact, he said.

Flight Captain Chartchai Punsuwan was killed when the aircraft, an ATR72-500, hit an unused air-traffic-control tower at the airport, a privately-run facility owned by Bangkok Airways.

Also injured in the crash and being treated at Bangkok Hospital Samui are the following passengers and Thai crew members: