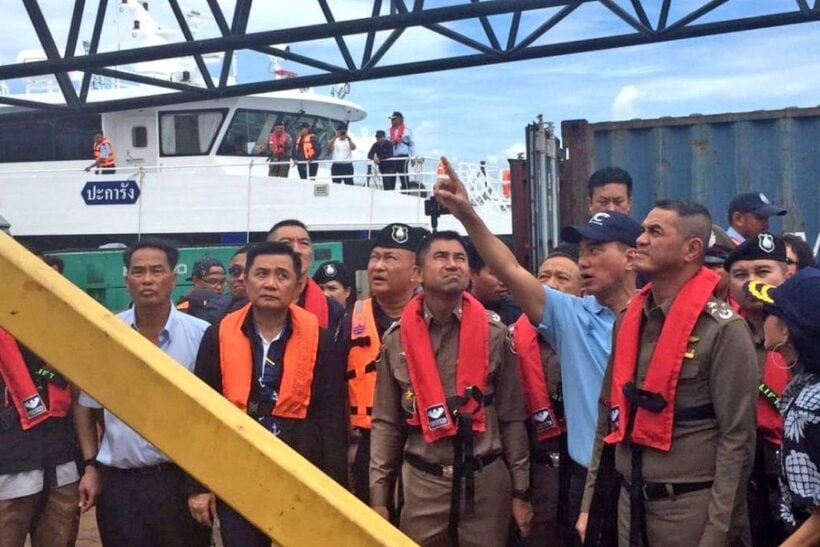 Deja Vu from the waters south-west of Phuket this afternoon.

Last week it was reported that the sunken vessel Phoenix would be raised to the surface before last Sunday. But the crane for the new salvage operations didn’t arrive until yesterday. But now, with the barge and new crane in full operation off Koh Hei, confident predictions are again being made.

The acting Immigration Bureau Maj-Gen Surachate Hakparn has again confirmed that Phoenix will be raised within five days.

Deputy Commander of the Royal Thai Police, Gen Rungroj Sangkram, and Surachate came down from Bangkok, joining more than 60 Thai and Chinese media, and went on an inspection of the Phoenix salvage operations.

Gen Rungroj says, “We are trying to push for the salvage operation as it the boat is important evidence as we take legal action.”

Phuket’s Governor Pakkapong Tawipat says that the barge, which has been making its way from Singapore with a 1,200 tons crane this week, yesterday at ready to help with the recovery of Phoenix.

Maj-Gen Surachate says, “This crane can definitely bring the boat to the surface. We can confirm that the boat will be raised in the next five days. ”

The Phuket PR Office reported that the new company ‘Seaquest Marine Ltd’ from Singapore has been preparing for the the salvage operations since November 7 with more than 100 people in the team.