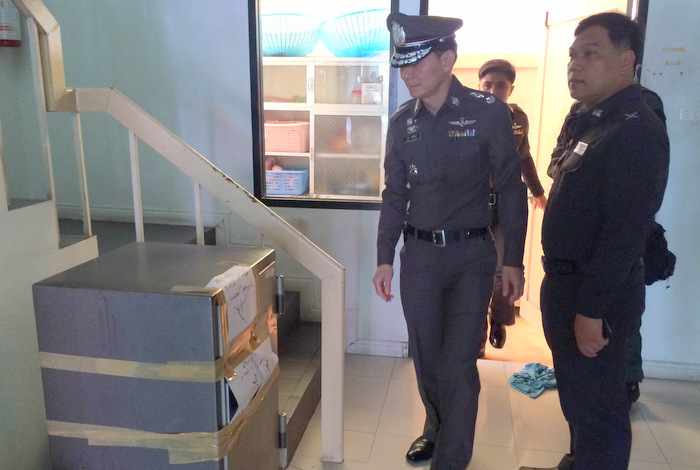 PHUKET: Police this morning swooped in on the offices of the Pisona Group on Phra Baramee Road in Patong, home of the central holding company belonging to former Patong Mayor Pian Keesin and his son Prab.

Officers led by Maj Gen Paween Pongsirin, the Region 8 Police deputy commander who has spearheaded the purge of Phuket’s taxi mafia, seized one computer and broke open two safes at the site. They also seized several boxes of documents.

The computer was handed over to Revenue Department officials present at the raid, while work began on opening the two safes.

“The safes are very old. I lost the keys when the tsunami hit Phuket years ago,” Mr Prab told the police.

After an hour, officers were able to open the safes. Inside, they found all the documents to be irrelevant to their investigation. The officers returned the documents and left the safes at the office.

The raid this morning followed former mayor Mr Pian and Mr Prab being released on bail at 3am today. The pair, along with Mr Prab’s older brother Mr Pattawee and five other Pisona Group members, are facing charges of extortion and criminal activities carried out by a criminal association (story here).

Headed by chairman Mr Pian, who was born in Patong 70 years ago (story here), the Pisona Group has holdings valued at more than a billion baht.

Mr Pian has long been a lone wolf in Thailand’s greater political sphere, and has previously lashed out at the central government’s seemingly ineffective attempts to enforce laws.

In 2012, he branded the investigation into Phuket land titles “hypocritical” and called for officials to support the efforts by Damrong Phidet, the former director-general of the Department of National Parks, Wildlife and Conservation (story here).

Mayor Pian’s comments also followed the sudden transfer of Dusadee Arayawuth from his position as the secretary-general of the Public Sector Anti-Corruption Commission to a post as the permanent secretary at the Ministry of Justice, effectively removing him from his investigations into corrupt officials.

Federer goes for another win under the lights