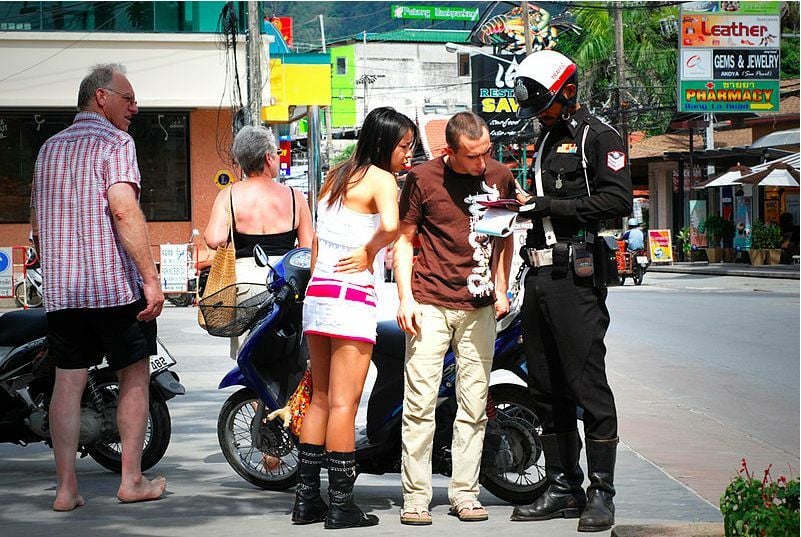 Phuket police have warned that anyone driving dangerously through checkpoints will be ticketed. This announcement comes after a report from a Thai news source said that the Tha Chatchai police had received an order to issue more traffic tickets. This was followed by a flurry of posts on social media warning drivers in Phuket that police at the Phuket Check Point were looking to give tickets and make arrests.

The Provincial Police responded in a post online, explaining that monitoring traffic is an important part of their job.

“Phuket Provincial Police would like to clarify that traffic discipline to reduce accidents is an important policy of the state in solving the problem of reducing the loss of life, body and property of the people as a whole.”

Phuket has some of the most dangerous driving conditions in Thailand, with motorbike crashes being one of the biggest causes of death on the island.

The report claimed that the Tha Chatchai police have been issuing an average of 5 traffic tickets per day. The report did not include where these tickets were being given out, and whether they were seeing the majority of these traffic infractions at the checkpoint or elsewhere.

The police went on to say that the matter was being investigated.

“Police have given importance to this matter and assigned Colonel Aganit Danpitaksat, Deputy Commander of the Phuket Provincial Police, to investigate such cases. Slow down a bit, many lives are saved…With concern from the spokesperson team of Phuket Province”

The Tha Chatchai police released a statement yesterday saying that for minor transgressions, they typically only gave out warnings. It’s only when drivers continued to ignore the warnings that they were fined.

“The issuance of the said order is aimed at preventing the spread of Covid-19 infections, preventing illegal acts and crimes, and violations of traffic laws. In the past, there have been frequent accidents in the area of ​​Tha Chatchai Police Station. This is partly due to speeding and not observing traffic discipline.”

The police also alluded to heightened security at checkpoints due to reports of smuggling.

“In addition, there was news about the smuggling of illegal items into the Phuket area through the Phuket Check Point, therefore we have had to be strict on traffic discipline and crime prevention for the safety of the people of Phuket and tourists who come to visit or come to do business in Phuket…The Tha Chatchai Police Station has done this for the benefit of the government, the Royal Thai Police and for the people of Phuket to have peace, safe from the dangers of traffic and the dangers of crime.”

Lastly, the police concluded their statement with a bit of friendly advice.

“Don’t be paranoid in life.”

Malc-Thai
34 minutes ago, HolyCowCm said: Well that doesn't make it a relaxing welcome back holiday or if a local foreigner anything that seems ok. The mask thing sounds odd unless it was truly not covering his nose. What they they…
HolyCowCm
29 minutes ago, Malc-Thai said: Luckily one of our group riding was thai military friend and he stopped and chatted with the police guy.. he was then just warned to wear his mask properly and yes it was under his…
Malc-Thai
24 minutes ago, HolyCowCm said: what I have noticed is some of these boxes of blue masks are assembled very poorly being too loose fitting. If you are on a bike they move around way too easily. But even I…

Guest1
7 hours ago, Malc-Thai said: I'm all for law enforcement but not selective. I sat 2 days ago at bottom of bangla by the beach eating and just watched for over half hour the police stopping just foreigners.. I have…
Bosse
On 10/18/2021 at 4:48 PM, Thaiger said: Phuket police have warned that anyone driving dangerously through checkpoints will be ticketed. This announcement comes after a report from a Thai news source said that the Tha Chatchai police had received an…