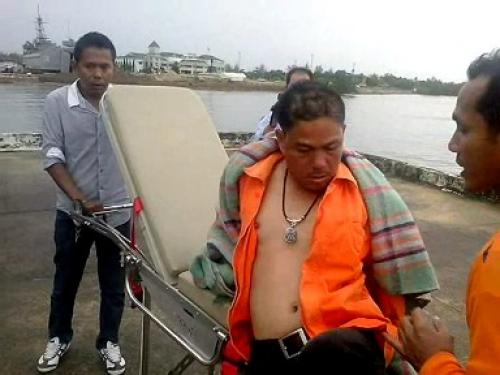 “Our boat departed from a sea port in Tambon Sai Tai at about 4pm to deliver goods to Phi Phi,” he said.

“Along the way, waves about four-meters high hit the boat, causing it to lean.

Water started coming into the boat and it began sinking, so I shouted to my crew to jump off and to hold onto any plastic package that could float in the sea,” he recalled.

“We were floating for about two hours before we were rescued by another boat,” Capt Thaweep added.

“Fortunately, another boat, the Sinmana 3, was passing by and rescued nine of them,” Lt Col Chansit said.

However, one of them, Pinit Chookerd, 38, was separated from the group and pushed by waves toward Koh Mai Pai.

“Our boat could not reach him because the water was too shallow, so we called in the Krabi Administrative Organization rescue boat,” Col Chansit explained.

“Everyone was taken to Krabi Hospital. They were exhausted and had chest pains from choking on seawater,” he said.

“However, they are all safe and have been discharged from the hospital,” Col Chansit added.