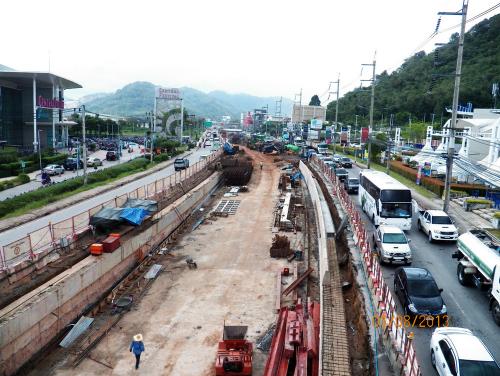 PHUKET: Roadwork at the Darasamuth Intersection that has caused huge tailbacks over the past few days is scheduled to be completed by today, with northbound traffic resuming its normal route through the junction, the Phuket Gazette has been told.

The delays have been caused by workers at the site, where Phuket’s first underpass is under construction, needing to excavate the northbound lanes approaching the junction in order to shut off a water mains valve, explained Phuket Highways Office Director Samak Luedwonghad.

Excavating the road has required the workmen to shut down one or even all northbound lanes at times and redirected traffic along the spur road to join Wichit Songkram Road in front of Surakul Stadium (map here).

“The traffic jams were caused by workmen digging up the road to find the water mains, but now they have found it and installed a new mains under the road. They will be resurfacing the road and all lanes northbound should be open by Friday,” Mr Samak said.

Despite the recent heavy rains that caused minor flooding across the island in past weeks, construction of the Darasamuth Intersection underpass in front of Central Festival Phuket shopping mall remains on schedule, he added.

“Right now, the retaining walls are being built. There was heavy rain recently, which can slow things down because mud is hard to dig and move around. However, the construction company is very experienced and didn’t have a problem continuing to work,” he said.

“So far, the underpass is 35 per cent complete. At the beginning of next year, it will be opened for road users on schedule” he explained.

“As for the underpass in front of Tesco Lotus on the bypass road, right now the company is setting up an administrative office at the site. After that they will start construction,” Mr Samak said.

The underpass project in front of Lotus, which started on July 6, will finish in June 2015, he noted.

“After the underpasses are finished, the construction companies will resurface the roads. There are a lot of potholes right now, caused in part by heavy construction vehicles. Resurfacing the road is part of the contract we made with the companies,” he stated.