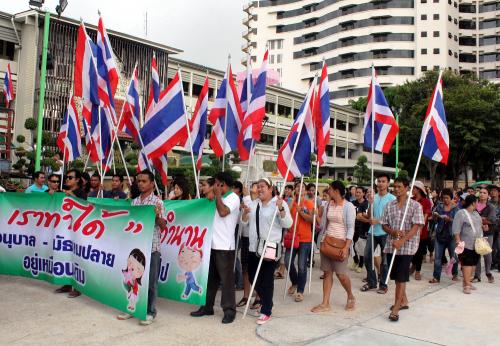 PHUKET: More than 500 concerned parents have protested the proposed closure of the kindergarten and primary sections at Plookpanya School in the heart of Phuket Town.

Phuket City Municipality is justifying the closures on the grounds that they are needed to streamline the area’s schooling.

The first stop for the protesters, led by Plookpanya Parents Association President Teerapol Limchoo, was the school (map here), where Mr Teerapol read out a statement decrying the planned closures.

“As far as we can see, this idea comes out of nowhere. Worse, it appears no consideration was given to either teachers likely to lose their jobs, or students. We do not think the municipality has just cause to close the kindergarten and primary sections that have served Plookpanya for over 100 years,” Mr Teerapol thundered.

“Plookpanya School is a very good school and a great credit to the community. We demand that the Phuket City Mayor and the school board have a rethink, mindful of the fundamental right to an education for every child according both to national law and society’s expectations,” he stated.

“Finally, we would like to ask the board to stop messing round with Plookpanya’s educational structure system, and give us their word that this ill-conceived plan be dropped,” Mr Teerapol urged.

The parents then headed to Provincial Hall to submit a letter of complaint letter to Phuket Governor Maitri Inthusut, Phuket Vice Governor Somkiet Sangkaosutthirak and Prapan Kanprasang, who is the chief of the Damrongtham Center (Ombudsman’s Office).

Mr Teerapol told the officials, “We have talked with the school board but with no satisfactory result. We are now inviting the Governor to examine the reasons for our actions today.”

Gov Maitri responded, “Education is very important, especially at kindergarten and primary levels. I will call on the Phuket City Mayor and the school board to discuss and clarify what is going on. Parents will be invited to attend any such meeting.”

Phuket City Deputy Mayor Dr Kosol Tang-Uthai, told the Phuket Gazette, “These plans do not affect current kindergarten and primary students, who will be able to continue and finish their education, and are guaranteed places in local municipality schools.”