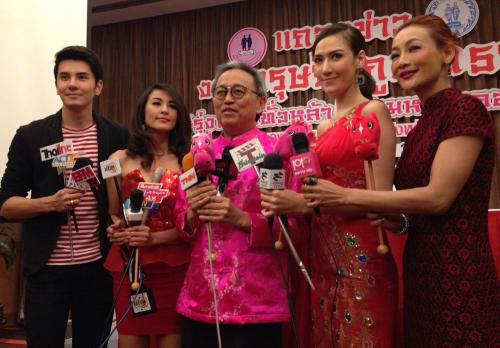 PHUKET: A troupe of 50 acrobats from China will headline the entertainment in Phuket Town to usher in Chinese New Year this Friday.

“They will also perform other splendid shows, but there will not be a fireworks display,” he said.

An officer at the PPAO’s Tourism Department explained that the decision not to have fireworks at Sanam Chai, opposite Phuket Provincial Hall (map here), was due to safety concerns.

“Sanam Chai is not as wide as it used to be and the protesters are still set up there [story here], so we decided against fireworks to ensure the festival is safe for everyone,” the officer said, declining to be named.

“We will ask the protesters to move some stalls to make room for the festival. I believe they will understand that the celebration must go ahead… We don’t think there will be any problems.”

Festivities will get underway at 4pm. Thai actress Sujira “Nui” Aroonpipat will compere the evening’s live entertainment onstage and Ae Jirakorn of Thai hip-hop band 321 will perform in concert.

“More than 60 food stalls will be set up and staff from Provincial Hospital will provide free checkups,” Mr Paiboon said.

“The field will be full of auspicious horses decorated with lights to bless everyone who visits the fair.”

Horses are especially auspicious on the Chinese calendar this year, as the period January 31, 2014 to February 18, 2015 is dedicated as the Year of the Wooden Horse.

“We wish everyone happiness and good luck for the coming year,” Mr Paiboon said. “I am sure the event will be unforgettable for everyone who attends.”