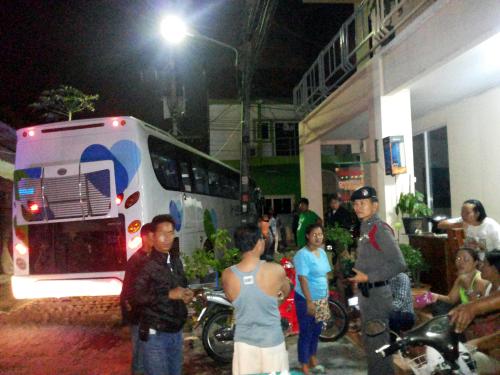 PHUKET: Faulty brakes almost resulted in a tour bus smashing into a house on Patong Hill last night, in a near-repeat of an accident that occurred at almost the same location about four months ago (story here).

“No injuries were reported. The Daow Duang Mai Travel company bus had no passengers. It was only carrying tourists’ luggage when the accident occurred,” Navee Singsom of the Patong Police said.

The driver, Pornpoj Jaklang, 37, told the Phuket Gazette that the accident resulted from the brakes failing and the road being slippery from the rain.

“When I lost control of the bus, it slid off the hill near Wat Suwankiriwong [map here]. However, I was able to stop the bus just before it was going to crash into a house,” Mr Pornpoj said.

Lt Navee said police would continue their investigation into the exact cause of the accident.