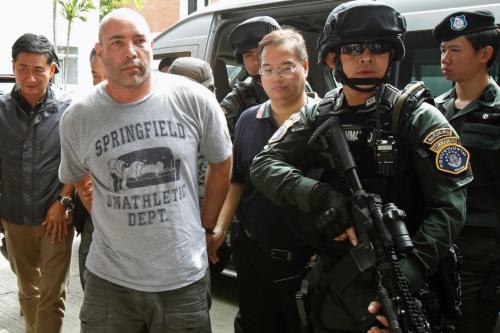 The cartel leaders were, in fact, Drug Enforcement Administration informants posing as druglords.

After his arrest in Phuket, Mr Hunter was quickly dispatched to Bangkok, where he was deported by DEA officers directly to New York to face charges of conspiracy, attempting to import cocaine and plotting to kill a law enforcement agent (video report here).

Testifying in a New District court on Saturday, Mr Hunter denied hiring ex-servicemen, including a former US Army sergeant and several ex-soldiers from other countries, and plotting to murder a US federal drug agent and informant as part of an international drug smuggling operation.

Mr Hunter and Timothy Vamvakias, both former US Army sergeants, and several other suspects were arrested and transported to New York to face charges that include murder and drug conspiracy, as well as illegal weapons possession.

“The bone-chilling allegations in today’s indictment read like they were ripped from the pages of a Tom Clancy novel,” said Manhattan US Attorney Preet Bharara in a statement on Friday.

“The charges tell a tale of an international band of mercenary marksmen who enlisted their elite military training to serve as hired guns for evil ends,” he said.

The DEA informants agreed to pay Mr Hunter and two others US$700,000 for the two killings, as well as an additional $100,000 to Mr Hunter “for his leadership role”, according to an indictment filed in New York.

The killings were to take place in Liberia, Mr Bharara told the press conference on Friday.

Mr Hunter and his alleged accomplices – who include Vamvakias, Dennis Gogel and Michael Filter of Germany, and Slawomir Soborski of Poland – were rounded up in a US Drug Enforcement Administration sting.

While Hunter was arrested in Phuket, Vamvakias and Gogel were apprehended in Liberia, where they had travelled to commit the murders.

Mr Filter and Mr Soborski were arrested in Estonia, where they had gone to “provide other services” to the DEA informants posing as Colombians, Mr Bharara said.

Mr Bharara declined to identify the DEA agent and informant targeted for murder as part of the sting operation.

The indictment charges that Mr Hunter and his team acted as security for cocaine shipments originating in Asia and bound for the US.

In late 2012, according to the indictment, Mr Hunter “collected resumes via email for prospective members of the security team”.

Earlier this year, Mr Hunter and his team allegedly travelled to an undisclosed Asian country to discuss the drug-trafficking security work with the two informants they believed to be part of the cartel.

Mr Hunter told the DEA informants that “he himself had previously done ‘bonus jobs'” – code for contract killings, and that his team “wanted to do as much ‘bonus work’ as possible”, according to the indictment.

Mr Bharara said that since leaving the US military in 2004, Mr Hunter “has allegedly worked as a contract killer, arranging successfully for the murder of numerous people”.

He declined to reveal who Mr Hunter is believed to have murdered, but said he “leapt at the chance to serve the purported drug traffickers” as a hired killer.

“Thanks to the determined, skillful and intrepid efforts of the DEA’s Special Operations Division, an international hit team has been neutralized by agents working on four continents,” he said.

The DEA’s Special Operations Division is a secretive unit within the US Department of Justice that includes representatives of the DEA, FBI, CIA, NSA, Internal Revenue Service and the Department of Homeland Security.

In a series of stories published earlier this year, Reuters reported that the DEA’s Special Operations Division funneled information from intelligence intercepts, wiretaps, informants and a massive database of telephone records to authorities across the nation to help them launch criminal investigations of Americans.

Reuters reviewed internal government documents which showed that law enforcement agents have been trained to conceal how such investigations truly begin – to “recreate” the investigative trail to effectively cover up the original source of the information.

DEA officials said the practice is legal and has been in almost daily use since the 1990s. They have said its purpose is to protect sources and methods, not to withhold evidence.