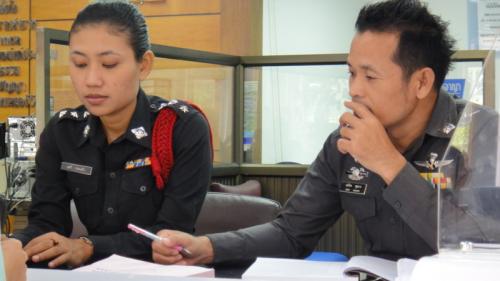 PHUKET: A Phuket taxi driver is being held by Phuket City Police today following a 19-year-old Chinese tourist alleging the driver held her captive for hours and tried to sexually assault her.

“Both the taxi driver and Chinese tourist have been brought in for questioning,” Detective Nucharee Longkaew, the Phuket City Police specialist officer for interviewing victims of sex crimes, told the Phuket Gazette today.

Capt Nucharee explained that the Chinese tourist entered a taxi at Phuket International Airport at about 4:30pm yesterday.

“She asked to be taken to a high-end resort in Patong,” she said.

It was not until around 9pm that two women passing by saw the taxi driver pushing his car along Songkla Road, a quiet backstreet near the busy Samkong Intersection (map here).

“The taxi driver told us that the woman didn’t know where her hotel was and that he had run out of gas,” one of the women told the Gazette.

“He complained that the woman was causing a great deal of trouble for him,” she added.

When the women arrived at the scene, the Chinese tourist was already out of the taxi, standing alone in front of a 7-Eleven.

“She yelled out ‘Help! Police!’ We asked what happened and she said the taxi driver had kept her locked inside his car for hours,” one of the women reported.

“The woman [Chinese tourist] said she was sitting in the front passenger seat of the taxi and the driver had touched her leg. She said she was very scared and felt threatened by him,” one of the women told the Gazette.

The women took the Chinese tourist to the Phuket Tourist Police headquarters in Phuket Town.

The Tourist Police received the woman’s complaint and then escorted her to Phuket City Police Station, where the case was handed over for further investigation.

Capt Nucharee explained that as the Chinese tourist could accurately describe the taxi and recall both the license plate number of the vehicle and the taxi driver ID number displayed inside the cab, officers identified the driver and went his house in Sakoo, near the airport.

The driver wasn’t home, so police left the message that the man was wanted for questioning.

He presented himself to police at 2pm today.

As of 5:30pm today, after more than three hours of interrogation, the driver had yet to leave the police station.