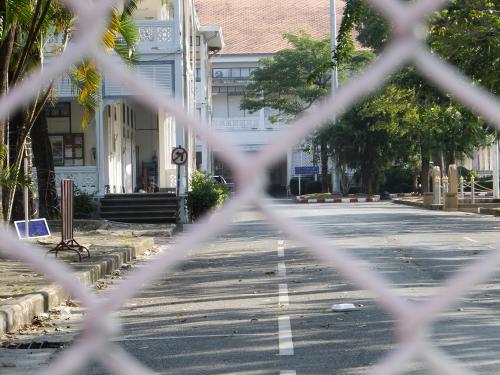 “The protest in front of Phuket Provincial Hall will continue until the big protests in Bangkok succeeds,” Mr Suratin told the Phuket Gazette.

In Bangkok, People’s Democratic Reform Committee (PDRC) leader Suthep Thaugsuban has repeatedly vowed that the protests in the capital will continue until caretaker Prime Minister Yingluck Shinawatra has resigned from office (story here).

However, Governor Maitri’s personal secretary, Sanyalak Yoorak, assured that Phuket’s top government official was continuing to perform his duties outside the office – as he had done previously (story here).

Meanwhile, the Bangkok protests are beginning to affect government services outside the capital.

The Phuket Passport Office has closed, despite assurances from protesters that they would allow the Ministry of Foreign Affairs section at Provincial Hall to remain open (story here).

“The Passport Division in Bangkok has terminated its server connection with provincial passport offices as a precaution while the Bangkok office is closed due to the protests,” the Phuket Passport Office said in a statement.

“We apologize for any inconvenience caused, and we will make an announcement when we resume normal services,” the statement read.

Meanwhile, Phuket Immigration and the Phuket Land Office continue to remain open and unaffected by the protests in Phuket, staff at those offices have confirmed to the Gazette.

Phuket City Police Superintendent Sermphan Sirikong confirmed that at least 40 officers are on duty at Provincial Hall to provide security.

“The most important thing is to make sure that no third party starts making trouble,” Col Sermphan told the Gazette.

Many of the officers will also help motorists by redirecting traffic, he added.

“I suggest motorists use alternative routes, such as Suthat Road or Palien Road. We have Traffic Police on duty at the main intersection in front of Provincial Hall to help road users,” Col Sermphan said.