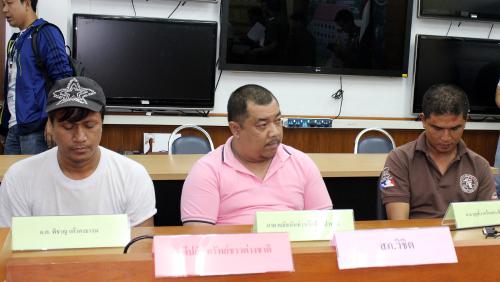 PHUKET: A Phuket police officer and two accomplices have been arrested for extorting money from a Frenchman at gunpoint while the men were taking drugs together.

Police are continuing their search for three additional suspects.

Henry Richer, 54, told police that on October 14 he joined Picharn Kaewkongtham and five other men in taking ya ice (crystal methamphetamine) at the Happy Inn Hotel on Wichit Songkram Road (map here).

They had taken drugs together before, he said.

Suddenly, Mr Picharn, who is a Wichit Police squad leader, told Mr Richer that he was a police officer. The five other men pretended to be officers too, Phuket Provincial Police Commander Ong-art Phiwruangnont told the press yesterday.

Sgt Maj Picharn handcuffed Mr Richer and threatened him with a gun as the group demanded that he pay 3 million baht for his release.

When Mr Richer replied that he didn’t have the money, the group asked him for his ATM cards and PIN numbers, said Maj Gen Ong-art.

Once they had the money, they warned Mr Richer not to report the incident to the police, and fled.

Fearful, Mr Richer said nothing for nine days. On Wednesday, he told Wichit Police his story.

Within a day, three of the six suspects had been arrested and charged with deprivation of liberty under Section 309 of the Criminal Code.

One of the men arrested, Boonpink Kiewngarmdee, 42, had helped Mr Richer in a 2-million-baht land deal and was upset that he had received a commission of only 2,000 baht.

“That’s the reason we threatened him for money,” Mr Boonpink later told police.

Police continue to search for the three remaining suspects.

Following a recommendation made by Gen Ong-art when he took office this month, the press were allowed to photograph the suspects only during the press conference, while the suspects upheld their right to remain silent (story here).

The suspects were not subjected to re-enacting the crime, but Maj Gen Ong-art supplied information about the case privately, in his office.

“He has been denied police bail and we will apply for him to be incarcerated at Phuket Prison while we continue our investigation,” Col Chaowalit said.