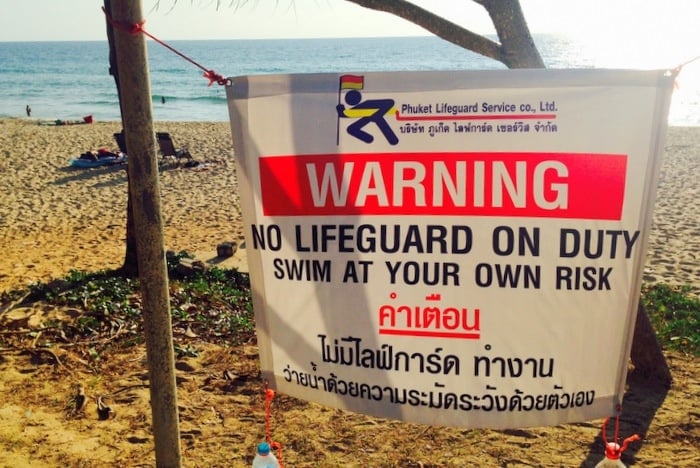 PHUKET: Lifeguards are expected to be back on duty at Phuket’s beaches within the coming week, the Phuket Provincial Administration Organization (PPAO) has announced.

The news follows Phuket Governor Nisit Jansomwong yesterday signing his approval for the PPAO to expedite the process of hiring lifeguards by directly negotiating with the Phuket Lifeguard Club (PLC).

“I signed my approval as soon as I received the application yesterday evening,” Governor Nisit told the Phuket Gazette.

“Lifeguards are very important to Phuket. We need them. We should not leave the beaches empty as a lot of tourists come to visit our beaches.

“I also suggested to the officers involved in the annual contract to hire lifeguards to renew the contract well ahead of time. I personally do not want our beaches without lifeguards.”

The need for Governor Nisit’s approval for a “special process” to hire lifeguards came into play after no party came forward to bid on the 22-million-baht concession to sign the new contract – not even the PLC, who have guarded the beaches for years – after the contract was publicly offered twice.

The previous contract ended on March 26, resulting in the lifeguards leaving the beaches unguarded the next day (story here).

PLC President Prathaiyut Chuayuan told the Gazette that the key issue at the time was the 2.2mn baht required to be held in deposits in order to bid for the contract.

“We did not apply for the contract as we cannot commit millions of baht just to be held in deposits,” he explained (story here).

That issue now seems to have been resolved, with the deposit required to be halved under the new concession, confirmed Chawalit Kiatdet, the PPAO officer responsible for issuing the contract.

“Other than the deposit required, all other terms will be as same as the previous year, which is a budget of 22mn baht to provide lifeguards at 38 stations at Phuket beaches,” he said.

“However, we have to call the PLC in to go over the terms of the contract. Once they agree, they can start work.”

Mr Chawalit said he expected the process to take no more than one week.

PLC President Prathaiyut told the Gazette that he saw no problems with the terms, as long as the deposit had been reduced.

“If there are no changes from last year and we can pay only the 1.1mn baht deposit, we will sign the contract,” he confirmed.

“We want to get back to work as soon as possible.”