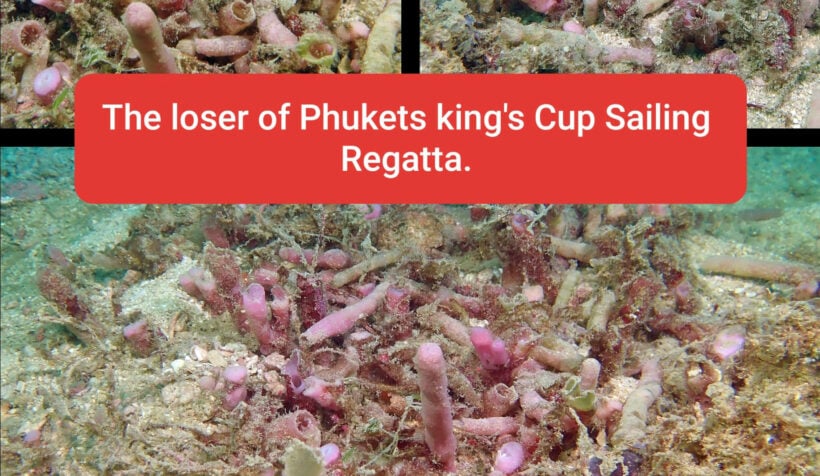 SCREENSHOT: Part of the post from the Kata Beach Shore Diving

The 2019 King’s Cup Regatta in Phuket has been run and won, packed up and gone home. The annual event, run for the 33rd time this year, is one Thailand’s most prestigious yachting regattas and traditionally allows its vessels to anchor in the natural Kata harbour, using the Beyond Resort in Kata, and other local hotels as their base.

But one local group are not only glad to see the fleet gone but want to point out that, despite the grand occasion and all the visiting yachts, there was also an environmental price to pay.

The Kata Beach Shore Diving page points out in a long post about the destruction of much of the remaining coral off the Kata Beach shore where the fleet anchors during the regatta, throwing out and retrieving their anchors every day.

“Environment that has taken 100’s if not 1000’s of years to grow destroyed and most probably will never grow back again.”

“All those beautiful critters, the seahorses, the cute frogfish photographed just 4 days ago, the nudibranchs and an endless variety of very rare critters rarely seen or photographed anywhere else in Thailand…. LOST to a destroyed environment!”

But the organising committee of the King’s Cup say the allegations against the yachts, as posted by Kata Beach Shore Diving, are unfounded. Kevin Whitcraft, long associated with the event, says the King’s Cup Regatta Organising Committee did not receive any complaints, comments or advice during the past week on the matter.

“At no time during the week did we see any yachts anchored in that area, besides being too shallow for keel boats, as described above boats need firm holding in sand.”

“To anchor on coral besides being impractical is anathema to the sailing way of life. Sailors of yachts are trained and skilled in nautical matters – anchoring is a key skill needed by boat owners.”

“Besides being illegal in many parts of the world, anchoring on coral puts the coral at risk, and basic common sense is that boat owners seek sand to anchor in as such provides a secure holding.”

The Kata Beach Shore Diving’s long critique about the problems associated with the visiting yachts and their mooring in the bay, claim the annual event puts the local marine environment at risk.

“The numerous…. sailing boats here to observe the sail boat racing both big and small but mostly big, expensive and luxurious were free for several days to drop anchor anywhere they liked within the bay ripping the seabed apart and causing …. the complete annihilation of an environment that is exceptionally special and was called home to numerous very rare marine animals.”

Last year Maya Bay on Koh Phi Phi Ley was closed to daily tour boats because of the destruction of the local corals in the popular bay after years of boats throwing their anchors over the side for mooring the tour boats.

Kevin Whitcraft went further to claim that the photos (below), used as evidence in the Kata Beach Shore Diving post, proves his point.

“In the picture attached there are no yachts shown in the vicinity of the Kata coral reef. If we had seen a boat improperly anchored in an area where there is known coral, we would have issued a warning to the boat owner immediately.”

Whilst the post from the Kata Beach Shore Diving Group has been shared 60 times and viewed nearly 3,000 times, the organisers of the Phuket King’s Cup Regatta are keen to share their side of the story.

Some sailors and supporters of the King’s Cup event have already posted comments saying that there is no knowledge of the mentioned reef in their charts and that they welcome an open dialogue to gain a better understanding of the claims made by Kata Beach Shore Diving Group.

“The Phuket King’s Cup Regatta Organising Committee are more than concerned about  the environment and do everything in our power to protect the environment. From the racing rules of sailing to guidelines to sailors concern for the environment is a top priority.”

You can read the full post from Kata Beach Shore Diving HERE. 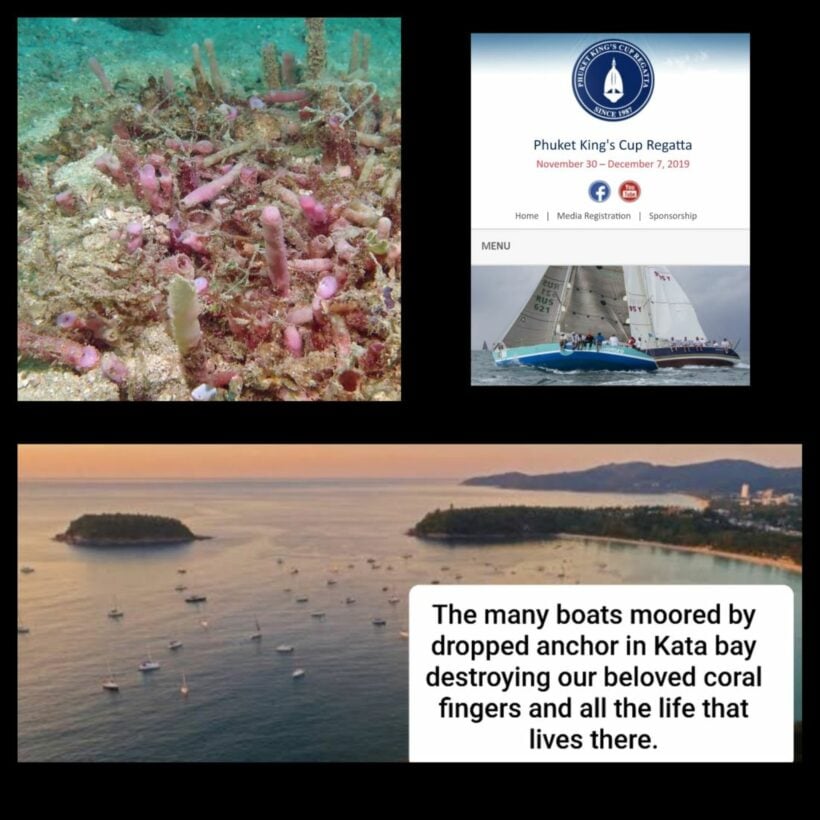