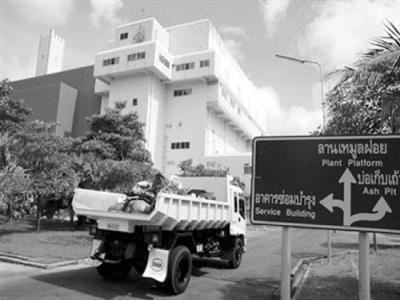 PHUKET TOWN: Work on a second solid waste incinerator at Saphan Hin should get underway in a few months’ time, according to Phuket City Municipality.

Deputy Mayor Thaworn Jeeraphat said work on the waste-to-energy incinerator, originally scheduled for completion in October this year, should get underway in June.

The incinerator, to be built by Malaysian firm PJT Technology Co Ltd, will have two chambers, each capable of burning 300 tonnes of trash a day.

It will also have 5 megawatts of electric power production capacity, some of which will be sold to the local grid.

When the project was announced in early January 2009, the municipality said construction would take 600 days.

According to this timeline, if construction begins in mid-June and goes according to schedule it should be on line in February, 2012.

The new incinerator is urgently needed because the existing plant at Saphan Hin can only burn 250 tons of trash daily, far less than the average 500-tons trucked to the site every day from all over the island.

The remainder continues to pile up at a 120-rai landfill next to the plant where trash has reached a thickness of 15 meters in some places, five meters below the ground and 15 meters above.

Surrounded by mangrove forest, the landfill is built on reclaimed land that is the legacy of Phuket Town’s tin mining days.

In June 2007, toxic wastewater held in retention ponds at the landfill overflowed into local waterways during a rainstorm and killed millions of farmed fish.

The existing incinerator, built about 10 years ago, is designed to produce 2.5 megawatts of power but current output is about 1.6 megawatts because the waste is too moist to allow the plant to run at maximum efficiency, Mr Thaworn said.

About 60% of the power generated is used to run the plant and its pollution control technology. The remainder is sold to the Provincial Electric Authority to generate revenue to cover other operating costs, he added.